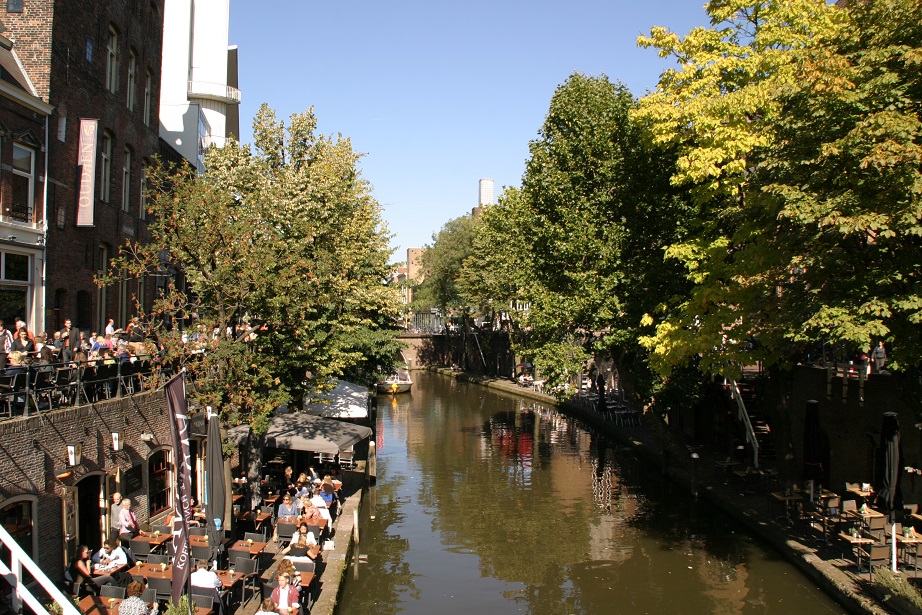 Following on from last weeks post all about how we got to the Dutch city of Utrecht, I am going to tell you all about the city itself today. It really is a hidden gem.

A mere 20 minutes by train from Amsterdam, Utrecht is home to the largest university in the country yet still maintains a quaint and quiet feeling, with a population of less than 400,000. That’s

If you have ever wanted to experience Holland and even Amsterdam yourself but you want a slower pace, Utrecht is the place for you.

It’s a super long post so grab a coffee and enjoy!

With the public transport running with excellent efficiency, the train station lies in the heart of the city and adjoined to the large modern shopping centre, Hoog Catharijne. You have to cut through the shops to get to the main outdoor space within the city centre – what a shame eh! The Hoog Catharijne has a huge ceramic tea pot proudly sitting on top too, see if you can spot it! 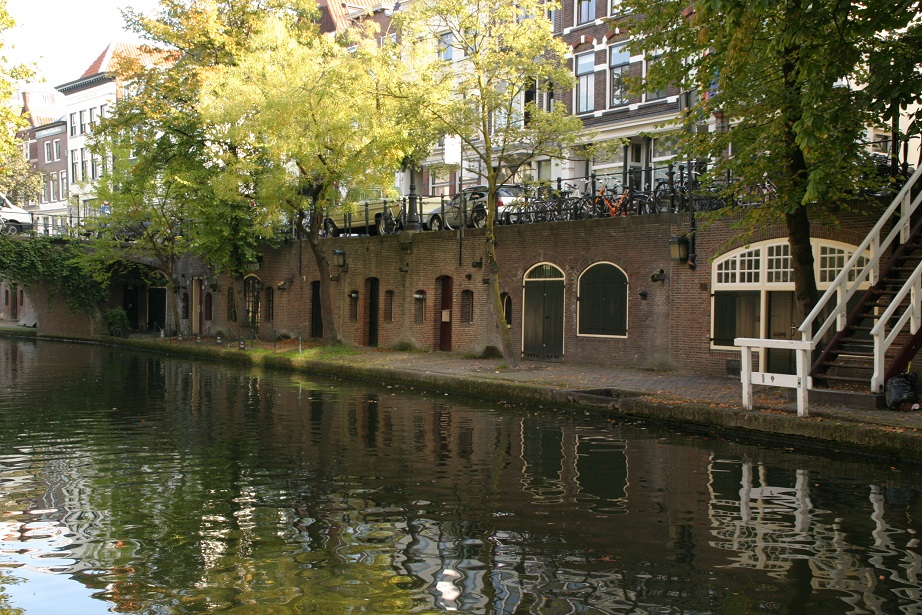 The centre of Utrecht is very compact and based around the canal, with most of the shops and bars on the Oudegracht which means old canal. The canal side is lined with bars and restaurants built in to the cellars of the buildings above, known as Wharf Cellars. The one thing you will notice in Utrecht is that everywhere is geared up for outdoor sitting and dining which was even pleasant in October. The tables and seats line the canal, a beautiful way to spend a few hours over lunch or a coffee. 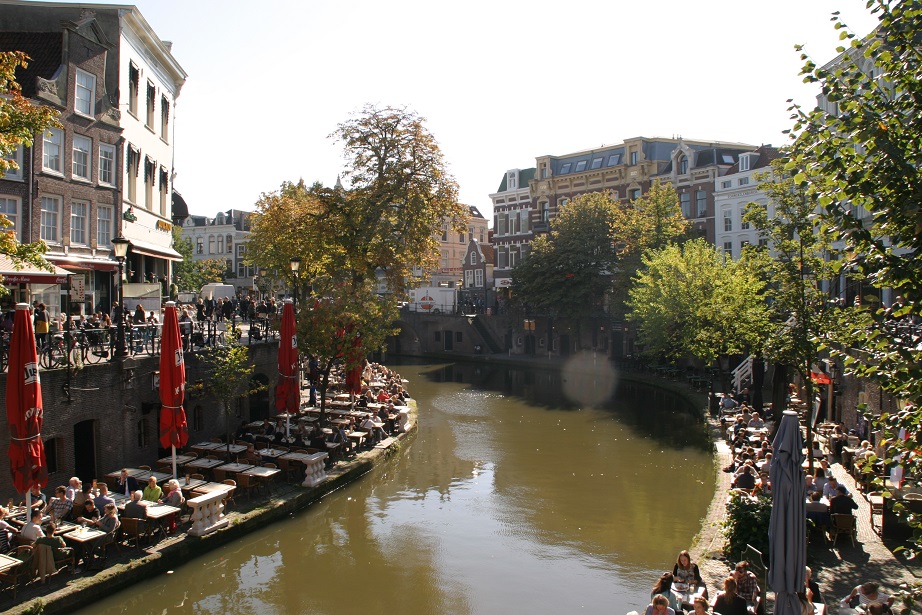 If you want to stray away from the Oudegracht, the students like to congregate at Neude, the new square of Utrecht. If you can fight your way through the swathes of bikes across the square, you will find a bar or eatery to suit your budget or taste. From basic beers to wine bars and nibbles, indoors or out, you can find it at Neude. 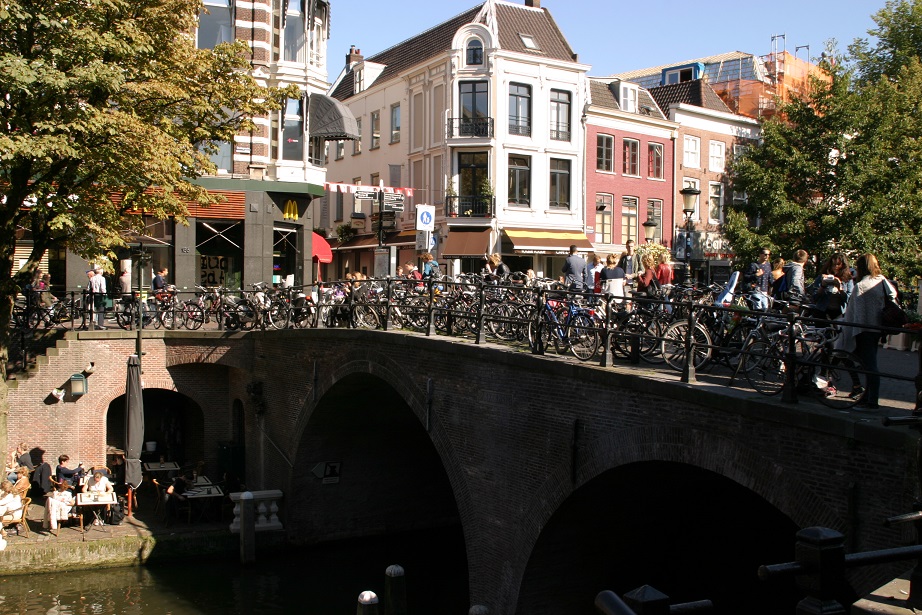 Our favourite on the trip that we visited a few times was Luifel as the large Heinekens were cheap and cold. Perfect as it topped 20 degrees while we were there and we had dressed for UK autumn! That’s another thing to bear in mind in Utrecht… they serve beer in small or large. Roughly equal to our half and pint, but they might look at you funny if you ask for a pint! The bar snacks are delicious too, it’s hard to resist 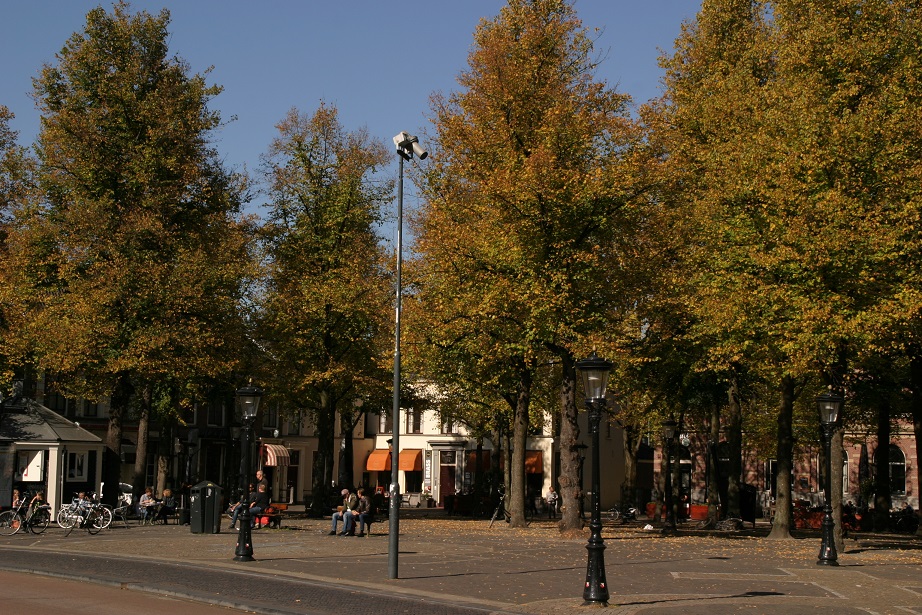 Tourist attractions aren’t that abundant in Utrecht, especially as the Miffy Museum is currently closed and undergoing work, but what you do get from Utrecht is a real sense of the city. Just walking round and soaking up the atmosphere is more than enough. The buildings are cute every where you look and the walk around the canal route is so pretty. Once you have walked the route, we recommend taking the canal boat tour for another sense of perspective. Picking up the boat at the Oudegracht, you spend an hour with a guide sailing the waterways learning more about the city, its history and the culture. 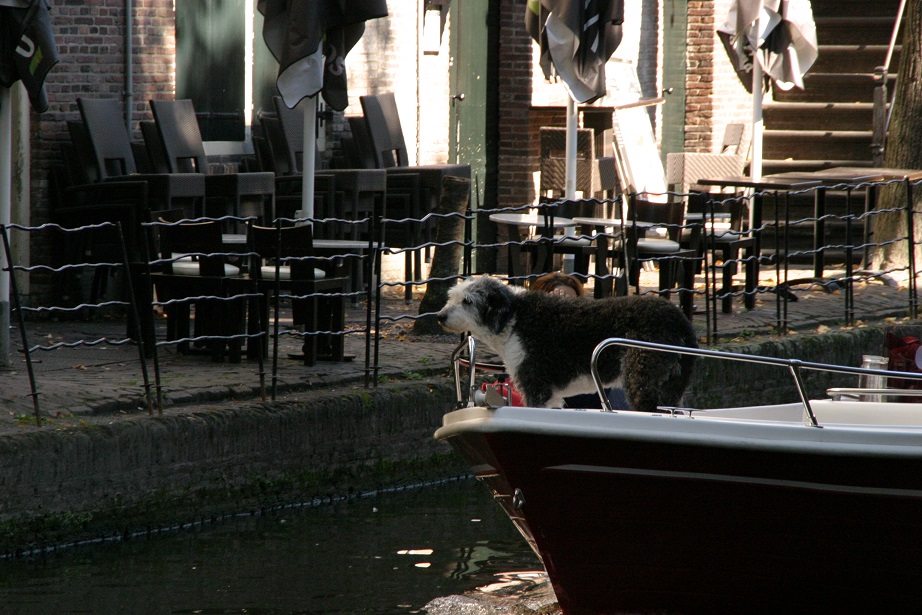 Of course, I was brave and took the canal tour and we loved the extra information. Under each lamp on the Oudegracht, there are carvings to depict what occurred in that area. As we ventured round the waterways, we saw lamps with cattle markets and orphanages and toll bridges. Our guide for the tour was fluent in English and gave the tour in both Dutch and English, which is very widely spoken in the city. We didn’t have any trouble at all.

The Dom Tower can be seen from almost every where in the city centre and dominates the skyline. You can climb to the top of the tower for the breathtaking view of the city, as well as visiting the Dom itself. Although now the Dom and it’s tower are 2 separate buildings with a square in between, they were once joined up but after a storm damaged the building, it was never reconnected. Not only is the Dom Tower the tallest church in the Netherlands, it also marks the point at which Utrecht first began 2,000 years ago. You can take a guided tour under the Dom and Dom Tower for those of you who love history. One of the main places we wanted to visit was Stadkasteel Oudaen. The former castle of Utrecht now serves as a microbrewery, bar and very tasty restaurant. With seating on the terrace, the Wharf and of course inside, this building is so steeped with the history of Utrecht it is a must-visit stop off in the city. After taking the brewery tour, with 5 beers brewed on the premises on tap and an expert coffee barista busy brewing away at the bar, there is something for everyone at Oudaen. The food is pretty damn tasty too. 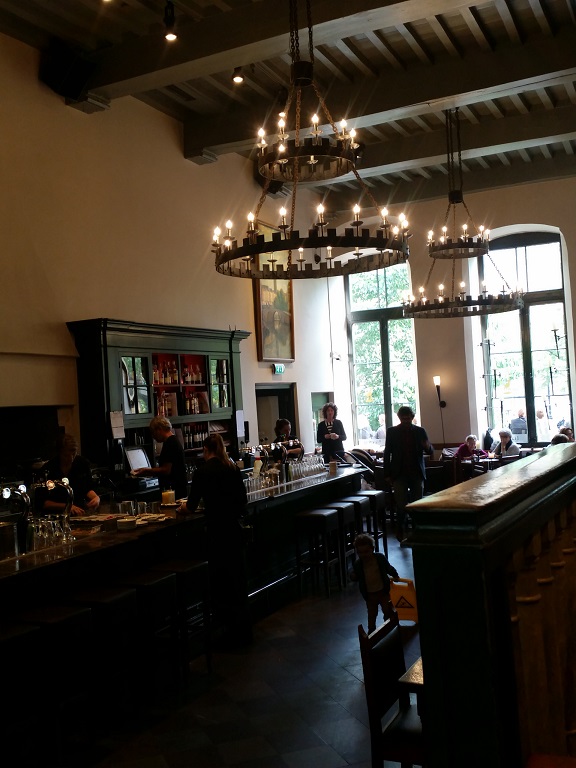 We had lunch here on our first day, as we both definitely needed our first drink in Utrecht. The open sandwiches were flying out of the kitch they were so popular so who were we to argue! Paul had the beef carpaccio and I had the parma ham and cheese. Served on their traditional dense bread, the sandwiches were packed with filling and fresh veggies. The chips and mayo that accompanied our lunch certainly did hit the spot too! Lunch outside in the early autumn sun was the perfect way to start our time in Utrecht. 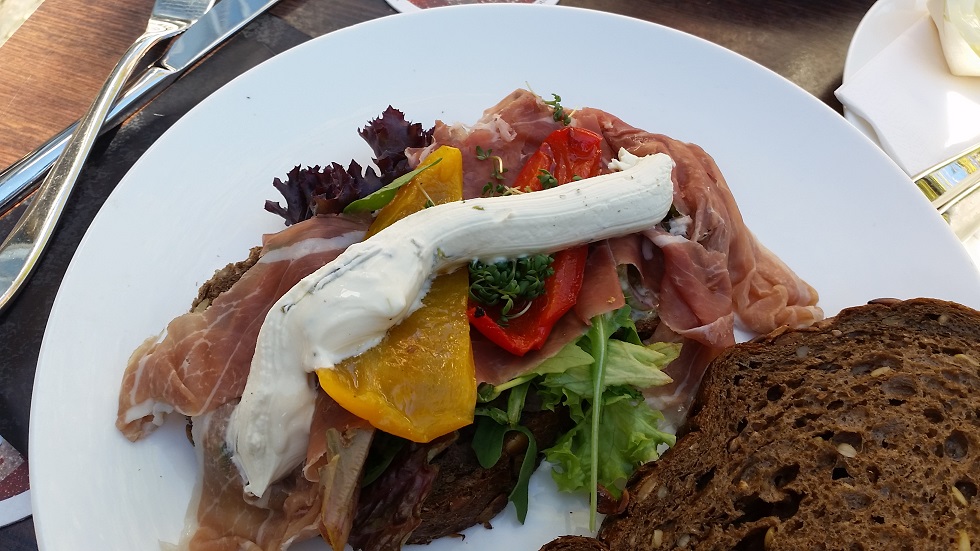 We visited several great cafe’s and bars while we were in Utrecht and had a delicious meal at Quignon, on the Oudegracht, sampling some traditional Dutch food like Bitterballen which can only be described as a whipped meaty mousse in breadcrumbs!  As our main goal for this trip was to explore and relax, we headed for where the locals went. 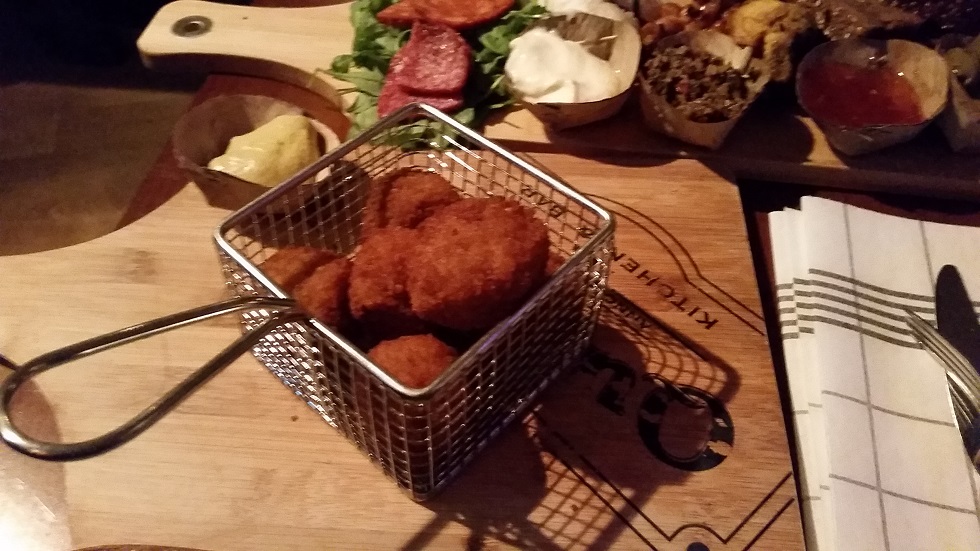 Beers & Barrels serves beer by the weight, at self pour tables. You can buy Heineken by the kilo. We didn’t stay here long as it felt a bit of a downward spiral in to drunkeness but the bar has a really hip and trendy vibe. King Arthur Café was a great place to grab a coffee and watch the world go by when the market was in full flow on the Terrace on Saturday morning. Quignon Bar & Kitchen had a really cosy atmosphere on a Friday night. Perfect place for chic drinks or some delicious tasty treats. They even allow cats to wander inside and make friends with the patrons!

We stayed at the Apollo Hotel during our stay which is a cute boutique hotel in the heart of the city and backs conveniently on to the Oudegracht. Some people say the view from the 4th floor café in the V+D department store offers the best view of the Dom and the city but I have to argue that the Apollo does a pretty good job of beating that view! From the pop culture art work hanging in reception to the incredibly helpful and friendly staff, the Apollo is quite possibly the best place to stay in Utrecht. Everything you could possibly want is right on your doorstep and the train station is a mere 15 minute walk away. The rooms are huge and I recommend asking for a room at the back of the hotel as they have windows the full length of the room offering amazing views.

The Apollo couldn’t be in a better location as the Trajectum Lumen starts right outside the hotel. A mostly self guided tour around Utrecht, this year round light installation is something fun and interesting to do on a night time if the bar scene isn’t for you or if you have children with you. Each view point and art piece is marked on the accompanying App and you can find them by following the illuminated arrows and blue eyes in the ground throughout the city. On Saturdays you can however take a guided tour. 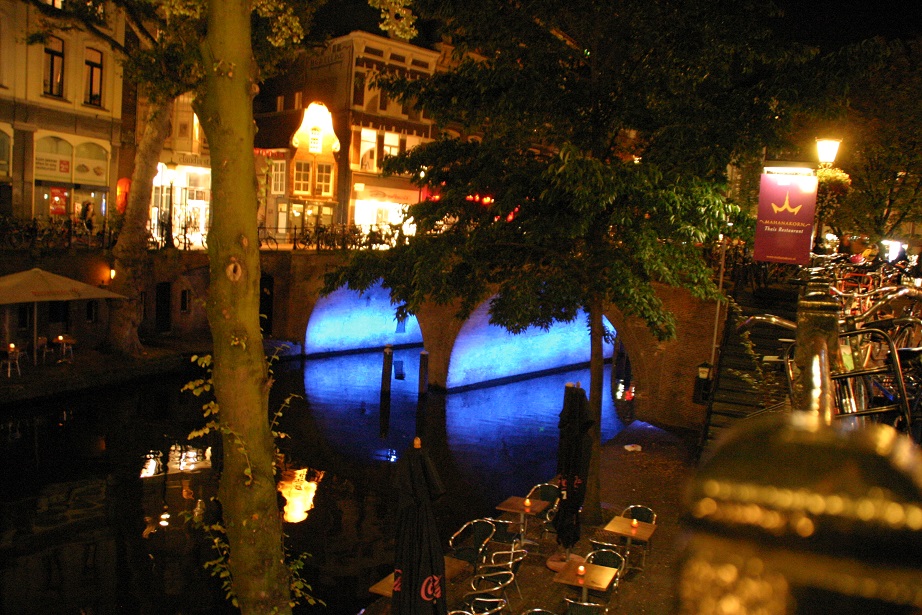 Our favourite pieces were the dazzling sparks of the Dom Tower and the Ganzenmarkt Tunnel which changed colour before you very eyes. Or maybe even the Church with a halo? It’s a tough call The walking tour takes around 20 minutes to complete and will take you all across the city to get a different feel for it. We felt very safe wandering round in to the night. 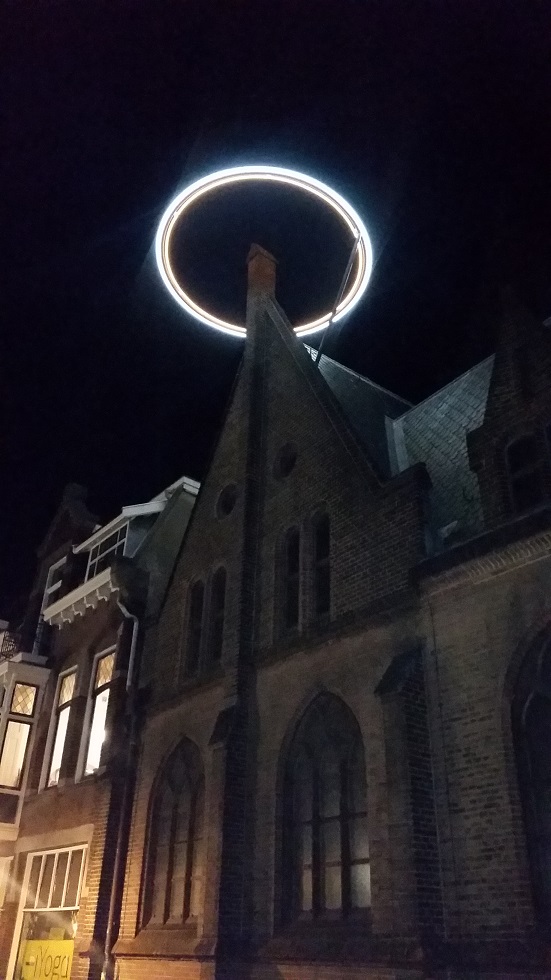 In the open space opposite the Hotel, there was a large market which was chock full of traditional food stalls, fashion and hardware. It was nice to see the market thriving with people buying things for every day life, much unlike our markets here that just seem to be full of the same old thing or food. We spent ages watching an 80yr old woman try to load her bicycle up with her shopping but she’d bought far too much. After about 15 minutes she managed to pack up and wobble off on her way!

After a very relaxed and interesting time in Utrecht it was sadly time to pack our bags and head back for the ferry. Our time in the city really gave us a taste of the Dutch culture and history without the tourist ram-jam of Amsterdam.

Would we return to Utrecht? Without shadow of a doubt. Would we recommend it? YES!