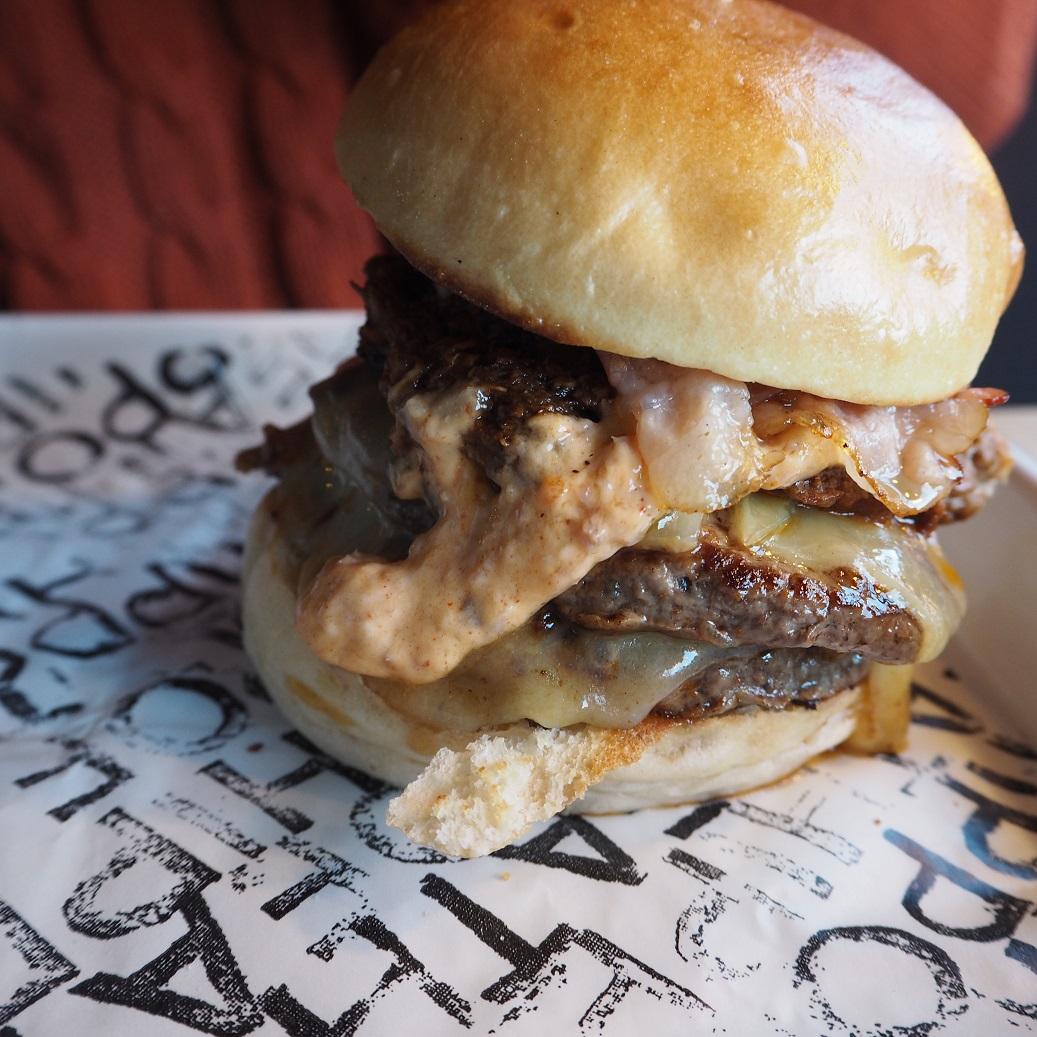 Going down the stairs in the main reception room, it has a stripped back, bare industrial feel with odd chairs, bleached wood tables and stools from your school science lab. Art work is sparse but tasteful. We were the first customers in at noon and it felt a bit cold and stark but as soon as others joined us, the place ‘warmed up’. 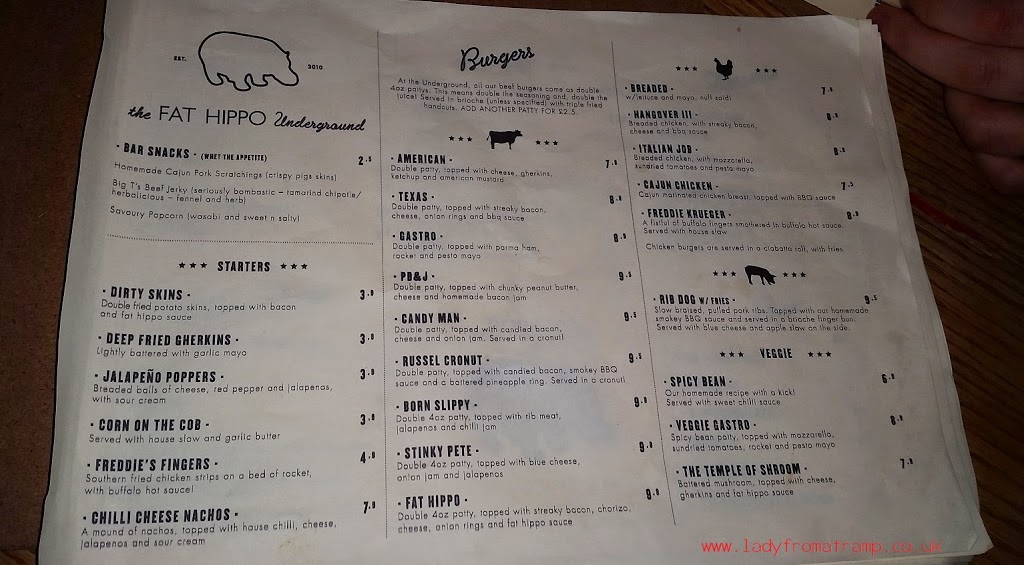 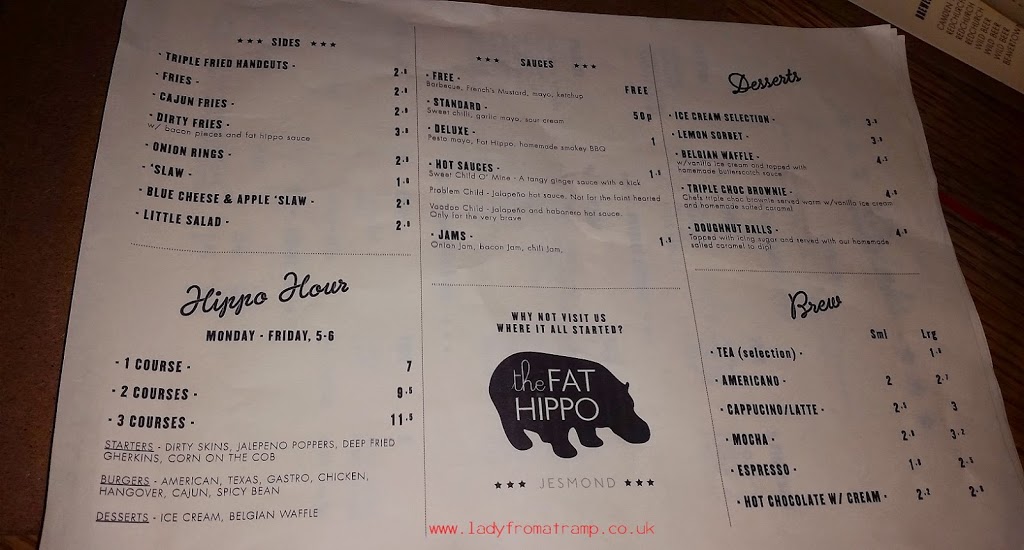 After drooling over the menu, we decided to start with Dirty Skins (£3.90) double fried skins served with bacon and Fat Hippo sauce. A generous portion for sharing, the only way we could describe the sauce is very similar to marie rose but nicer. Double frying the skins left them a deep brown and cooked to perfection.

Mr Tramp, the burger officionado, chose the Fat Hippo burger (£9.90). A double 4oz patty topped with bacon, chorizo, cheese and an onion ring. The likes of which we have never seen before. An onion ring of gargantuan proportions! Served with double fried fries and a side of pickles. A side order of  Problem Child hot sauce (£1.50) provided an unusually fruity heat to dip the chips in. 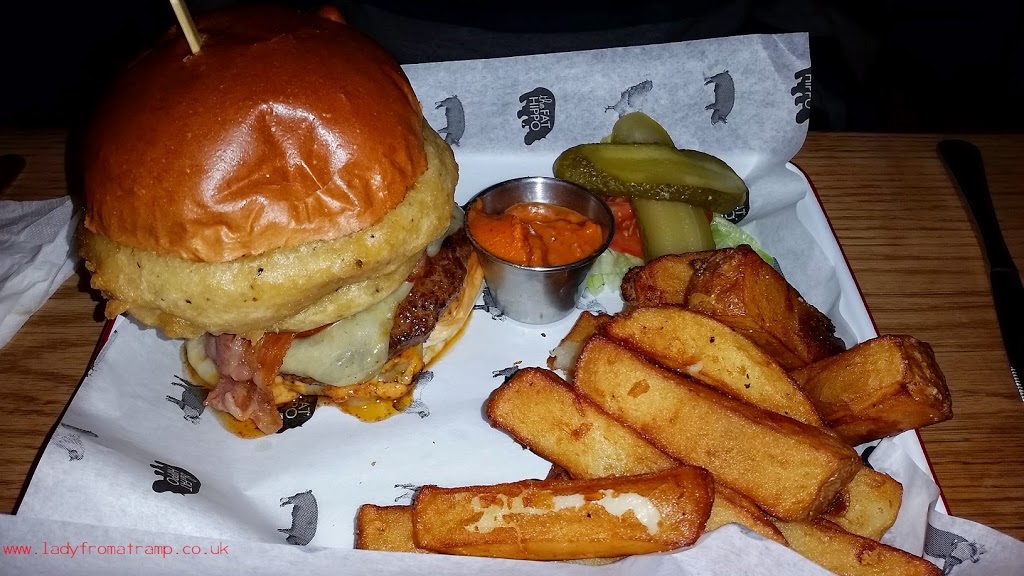 Mr Tramp was thoroughly impressed with his choice. He is a firm believer that if a restaurant can execute the simple task of making the patty so flavourful you don’t NEED toppings, then every other burger they offer can only amplify that quality. His verdict was one of the nicest burger pattys he has ever had.

I channelled my inner Elvis, obviously, and picked the PB+J burger (£9.50). A double patty sandwiching a dollop of peanut butter topped with bacon jam and cheese. Again served with fries and pickles. 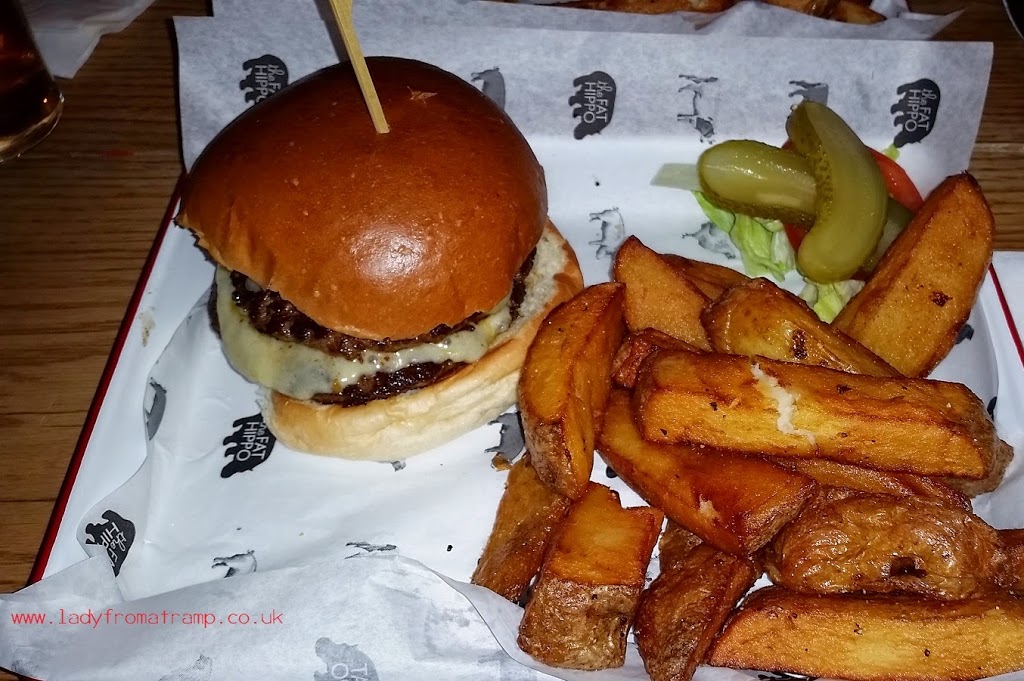 I should have prefixed this review with the ever so bold statement that I don’t particularly like burgers and i really don’t like red meat either. That said, the PB+J absolutely blew me away. Tasty, juicy meat topped with the rich bacon jam was offset by the savoury creaminess of the peanut butter.

I’m not going to lie, with most burgers I usually let Mr T finish mine and I polish off my chips… and his but not this time, the burger was devoured and the chips cast aside. An unheard of act!

To wash the food down, there was a great selection of beers too.

All the food was served with branded grease sheets on top of charming faux enamelware.

On hindsight Mr Tramp and I could happily have skipped the skins as the burger was so very filling. We definitely couldn’t have managed a portion each! That’s no bad thing though is it?
We need a Fat Hippo restaurant in Durham…. Immediately.