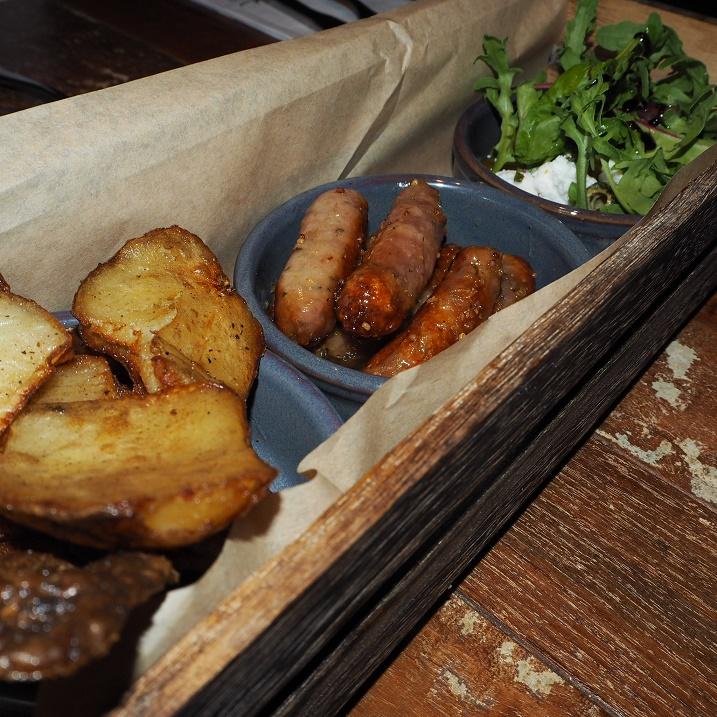 After having a huge renovation, the stalwart boozer, The Three Horseshoes, that has been tucked away hidden beside the Nissan Factory has bounced back and is ready to put itself on the gastro pub map of the North East.

With well appointed rooms above the bar,  the open plan dining area and bar is light and airy. A pleasant change to what it was. Keeping it local, they stock both Sonnet43 beers and Poetic License gin.

We hadn’t been in around 10yr so we visited to put the all new menu through its paces. 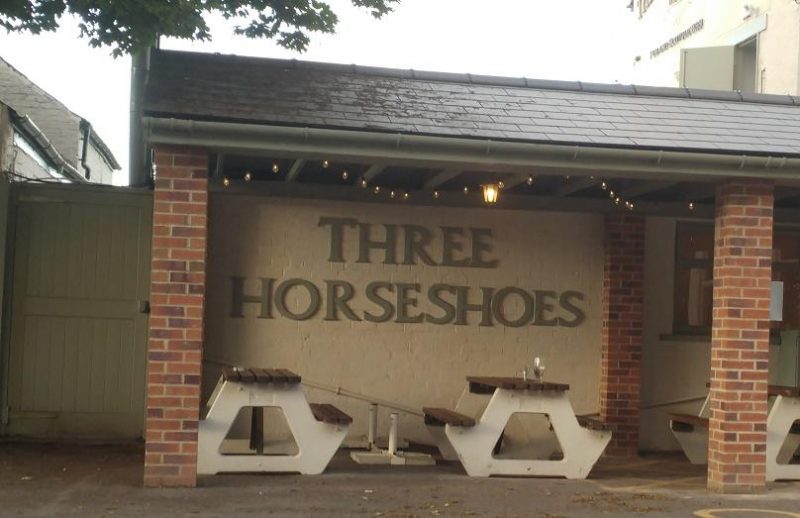 As there is no hostess station at The Three Horseshoes and the restaurant is table service, my top tip is on arrival, head for the bar to snag a table so that they know someone new has arrived. We visited during the Euro’s on the night the England match was on and the 2 bar staff were stretched to full capacity between beers and bait. It has been a bit like this on the couple of visits I have since made.

Not letting an extra few punters put us off being fed, we settled in to peruse the menu.

The menu is quite fluid as it doesn’t have a regimented ‘starters and mains’ section but rather small plates to graze on and then more substantial meals. In the lieu of individual starters, we opted for 3 of the small plates to sample. Priced at 3 for £10 or 5 for £15,  I would like to see a price point for an individual serving but between us, 3 was more than sufficient. The 5 dishes would make a really nice lunch selection. 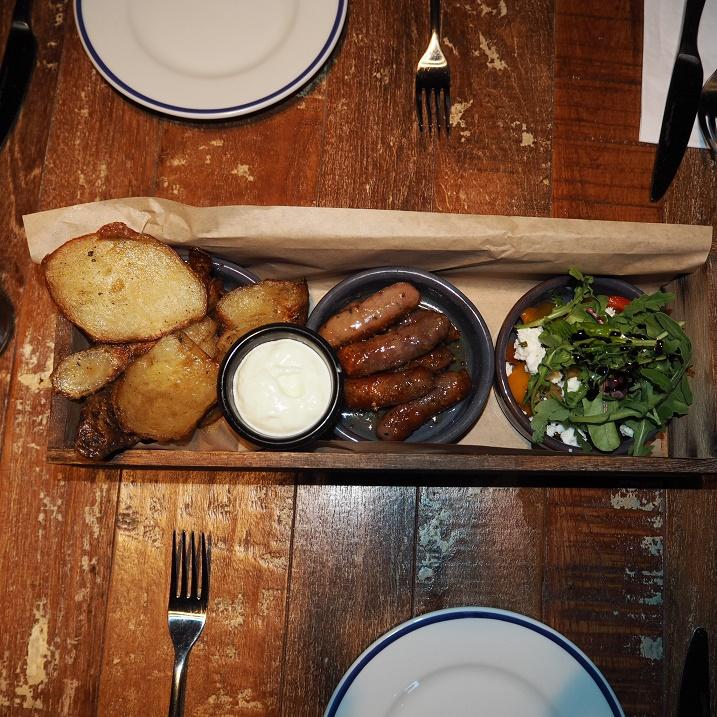 We chose the feta salad with olives and peppers, mini Cumberland sausages with honey and coarse grain mustard glaze and potato skins with garlic mayo. The skins were pretty much as expected, while the creamy feta cut well with the salty olives and sweet peppers. The sausages were moreish. Looking back I think we wish we had just picked 3 portions of those. The honey and mustard glaze was sweet and sticky with a gentle kick from the mustard. We fought over there and couldn’t get enough.

The small plates selection would be good for one of those afternoon catch ups where you don’t want a full lunch, but you want something. Perfect to share and nibble.

With everywhere seeming to offer hanging kebabs now since they landed on the scene via Botanist, I had to give the Threehorse Shoes’ offering a go. The Chilli + Garlic Beef kebab (£9.95) was reasonably priced and more generous than the original hanging kebabs that I’ve had to date, it made a decent Monday night light dinner. The beef was a little on the tough side but the chilli and garlic marinade was spot on. The vegetables were nicely charred from the grill which added a smokey tang to their sweetness, of course offset by the marinade. Not going to lie but the best bit is that garlic butter dripping down in to the chips below!  They are served with chips or salad but an option for both would be nice to make the meal more substantial. 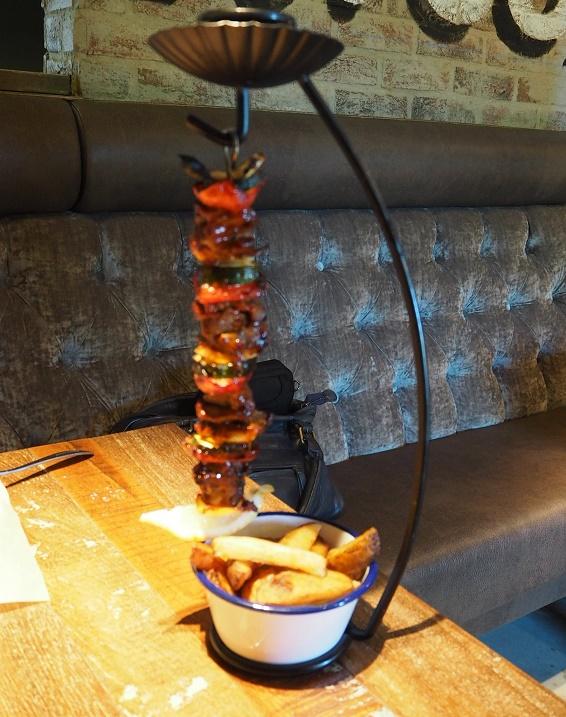 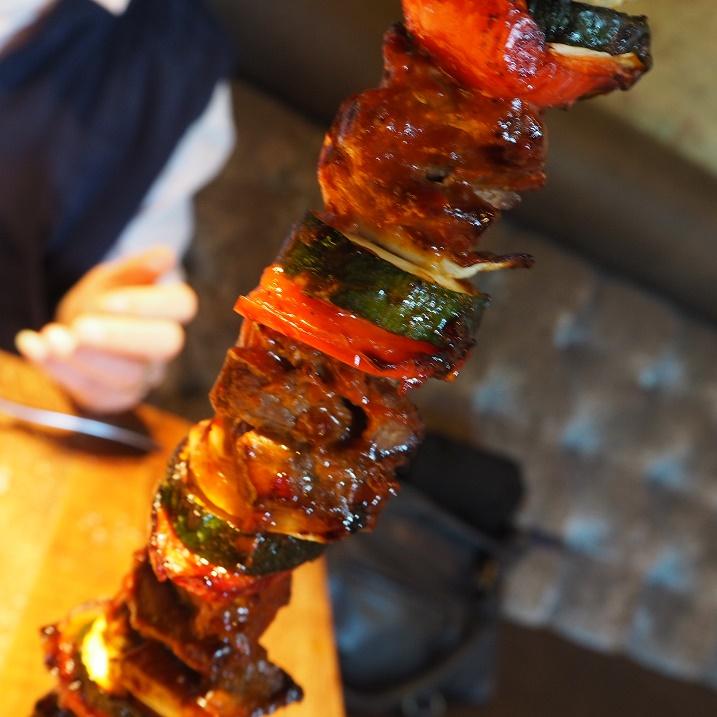 My dining companion was swayed by the beer battered fish with double dipped chips (£9.95) which came with the usual trimmings – mushy peas and tarter sauce. With my companions absolute obsession with well cooked brown chips, they were over the moon with their meal when it was presented. The huge side of fish didn’t go amiss either. The batter was light and crisp whilst keeping the fish moist. The dish was demolished with speed and got the double thumbs up. 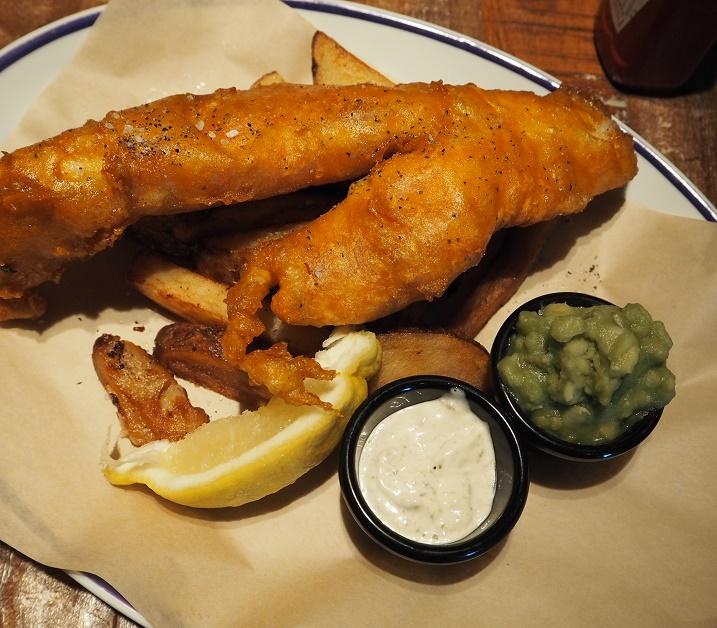 We had just enough room for a dessert and both opted for Churros. They didn’t actually last long enough to be photographed to be honest! 1 with the thick and gooey chocolate dipping sauce and 1 with the salted caramel sauce. The churros were a little too doughy in the middle for me, but they were crisp on the outside and suitably covered in cinnamon sugar. A nice alternative to the ‘usual’ pub puddings and hit the spot perfectly.

As The Three Horseshoes pub is linked up with Sonnet43, there is ale recommendations for some of the more popular dishes that pair well with the offering from the Durham brewery. I like this, even though I’m not an ale drinker myself!

As it is summer and the inevitable summer holidays, there is outdoor seating, a dedicated kids menu and even a play area outside for the little ones.

Definitely a big improvement on how The Three Horseshoes used to be!