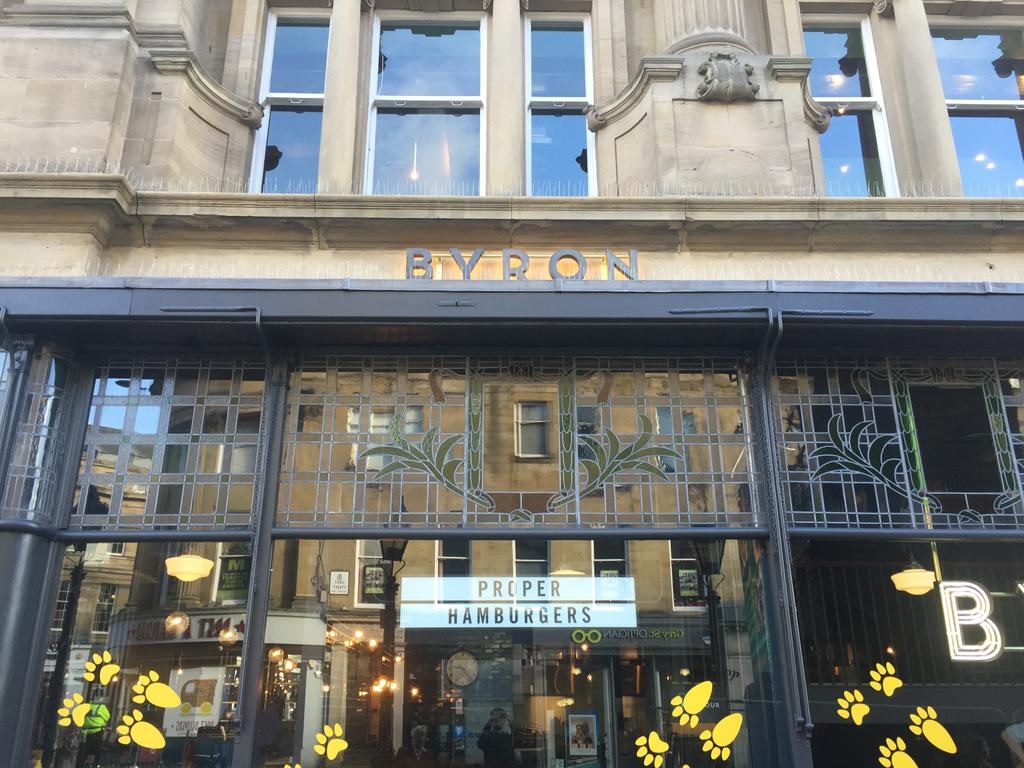 One thing that has always bothered me until very recently was the North East dining scene. Yes we do independent and awesome and we do it VERY well, but for the longest of time, hip and trendy ‘London’ based brands and chains wouldn’t set foot up North. This has changed and it has changed for the better now that Byron Burger has landed.

Byron has landed on Grey Street in a prime location right next to the Monument and most importantly – the giant screen showing the Rugby World Cup!

Byron Hamburgers was borne in 2007 after founder Tom Byng wanted to recreate the simple and juicy burgers he had devoured whilst living in America. Did he succeed? I certainly think he did.

Visiting a week after it opened, we were faced with a queue that snaked out of the building, across Grey Street and back up to the Monument. Thankfully if you have a reservation you can fight the crowds and hop to the front. 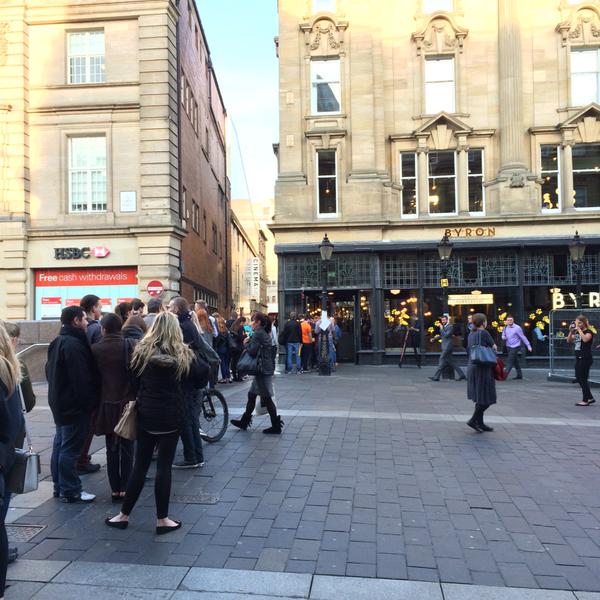 For a lot of people, they might not know that the previous incarnation of the building was both an H&M and a Waterstones. My memory stops there but it was nice to see that the layout inside hadn’t been altered – well except the addition of a kitchen and bar of course! The large stair case dominated the centre dining room but it does thankfully provide 3 floors of burger munching seating.

Our favourite branch of Byron is in Canary Wharf, London as on a weekend it is has a really relaxed cafe diner vibe when all the high powered office workers aren’t there. The Newcastle restaurant definitely has more of a formal restaurant feel to it but with the rich green ceramic tiles and dark wood it felt very cosy despite the open plan layout.

During the launch, the chaps from Camden Brewery have been in house doing tastings but we settled for some own-branded Byron Lager and a Coke while we had the choice of picking a burger! 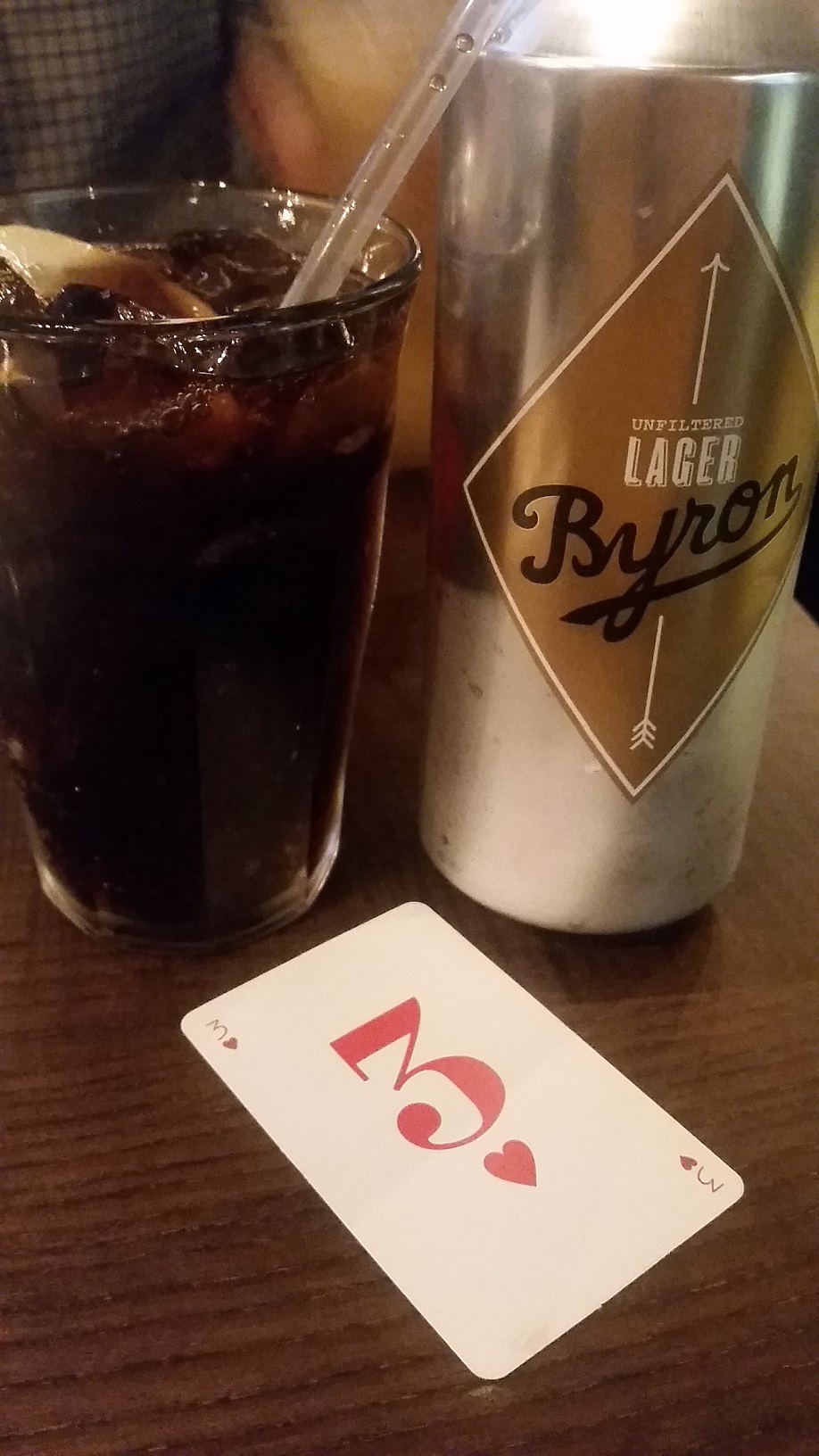 Paul went for the classic Byron Burger ( 6oz hamburger, dry cure bacon, mature Cheddar, shredded iceberg, tomato, red onion and Byron sauce – £9.50) with a side of thick and gooey Mac ‘n’ Cheese (£3.95). It made a pleasant change being able to choose your sides without just automatically being given fries. It makes the meal slightly more expensive but you would rather get exactly what you want. 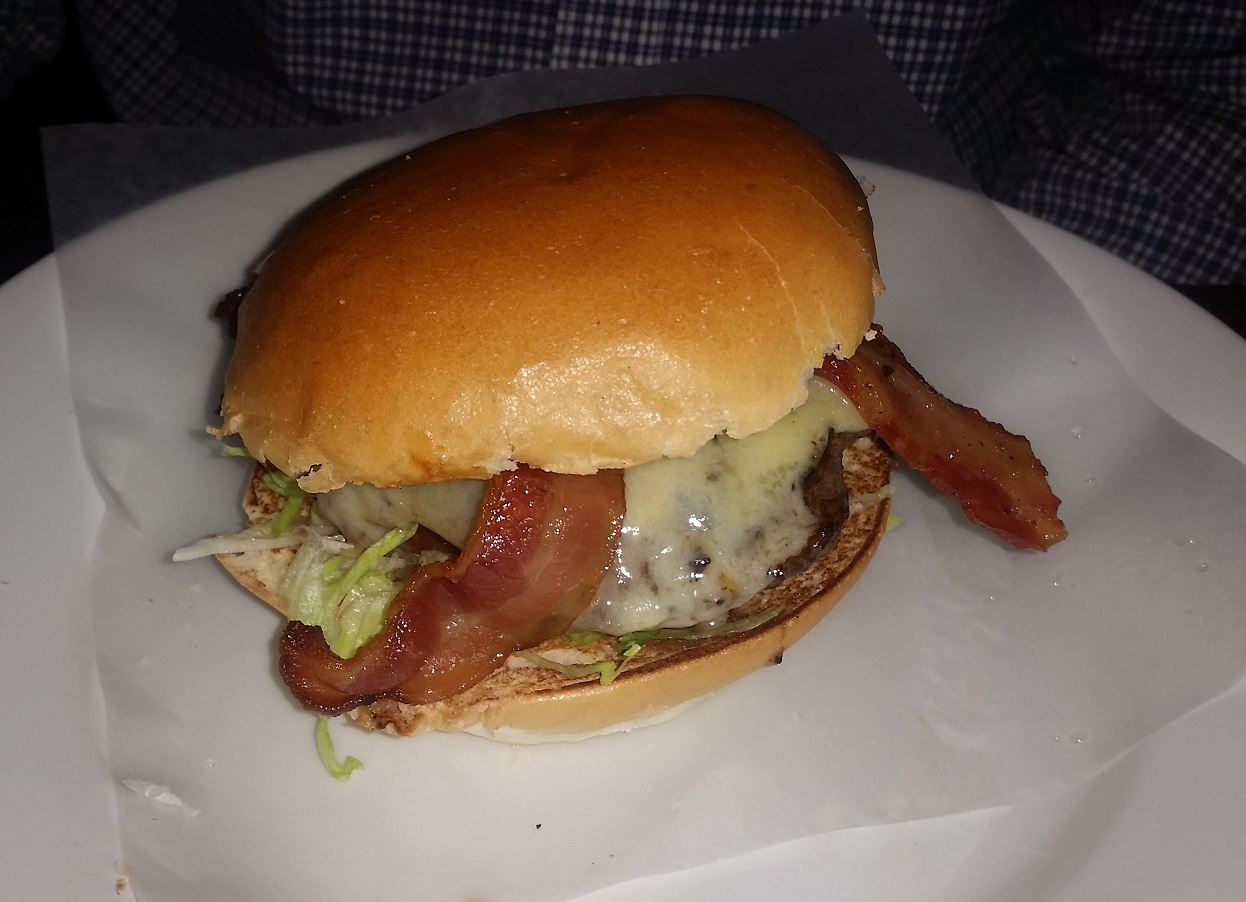 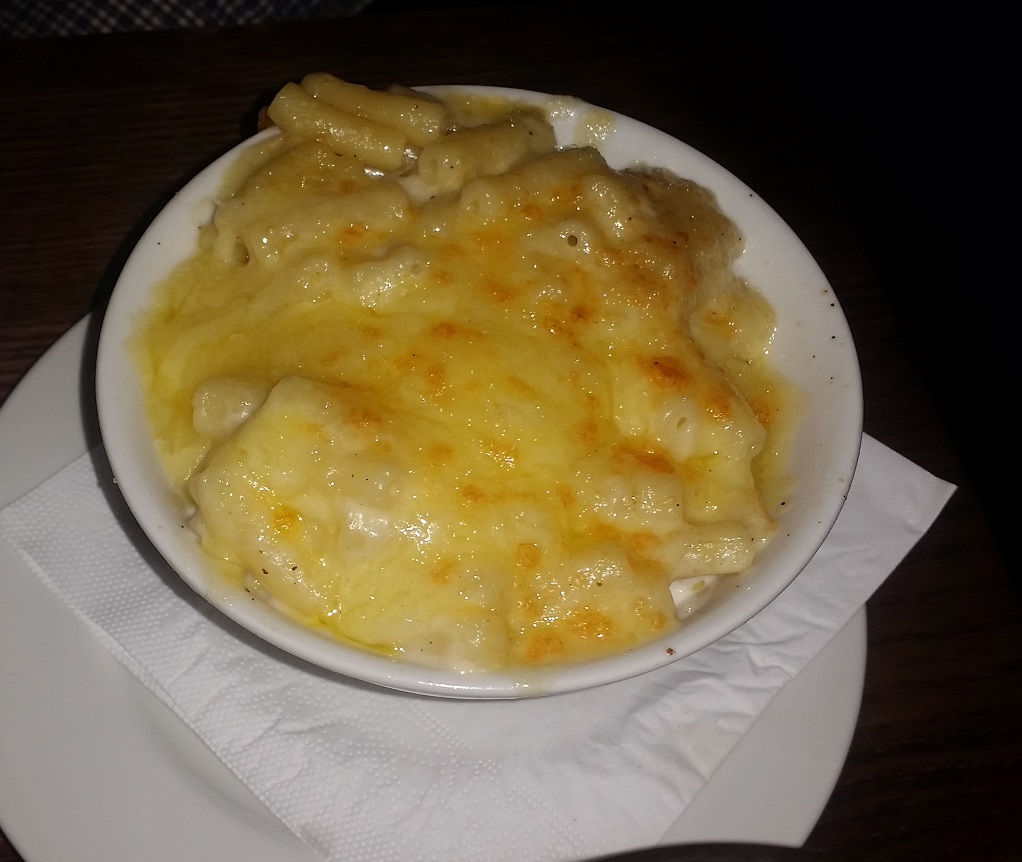 I broke tradition as I ususally go for the Chilli Queen but tried Le Smokey ( 6oz hamburger, mature Cheddar, streaky bacon, crispy fried onions, shredded iceberg, pickles and smoked chilli BBQ sauce – £9.95). I pushed the boat out and tried the infamous Courgette Fries (£3.50) which were delicious and really unusual. Light and crispy with a crunch of the batter before getting to the softer courgette. I’d definitely order them again! 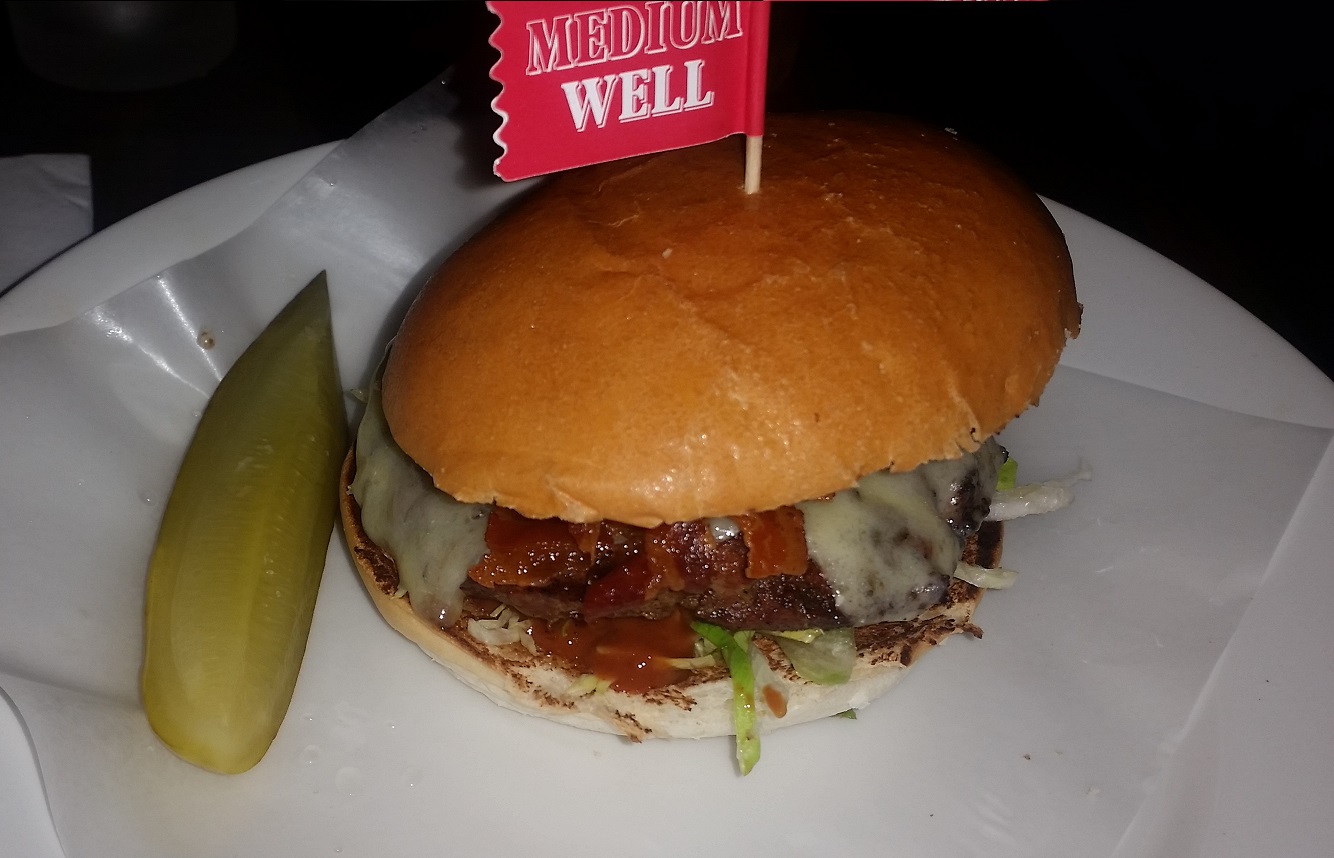 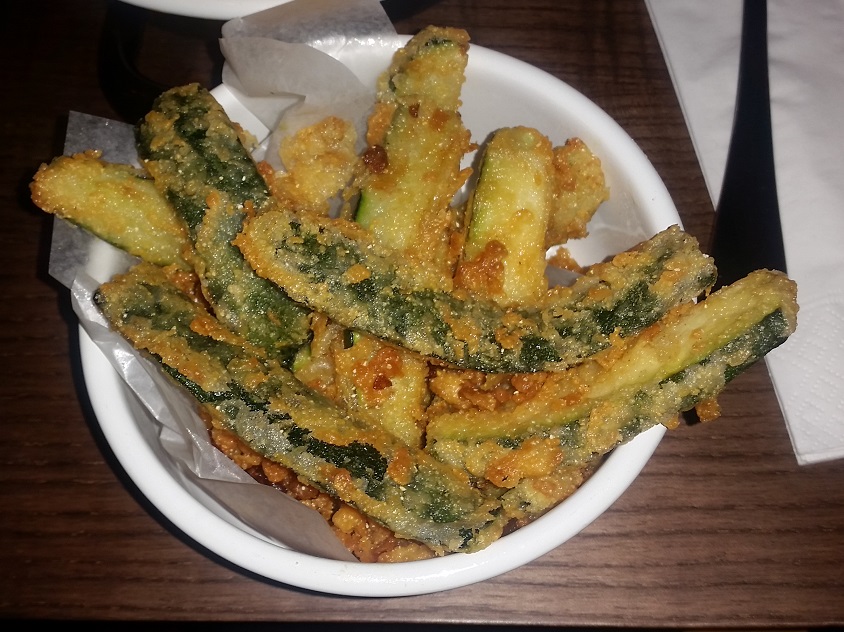 Both burgers were indeed juicy and flavourful, living up to Byngs’s vision. The pattys are served medium as standard with a smidge of pink but I thought I’d put the grill chefs skills to the test and asked for a well done patty. Our server counter offered and suggested I tried it medium well instead – no pink but still just as juicy and packed full of the charred flavour. It really was cooked perfectly for me so hats off to the informed staff!

The queue was huge but the kitchen was full of hustle and pep so the tables were moving along quickly so don’t be too put off you if you see a line. At present the basement level is not open but that’s still 2 floors full of space. 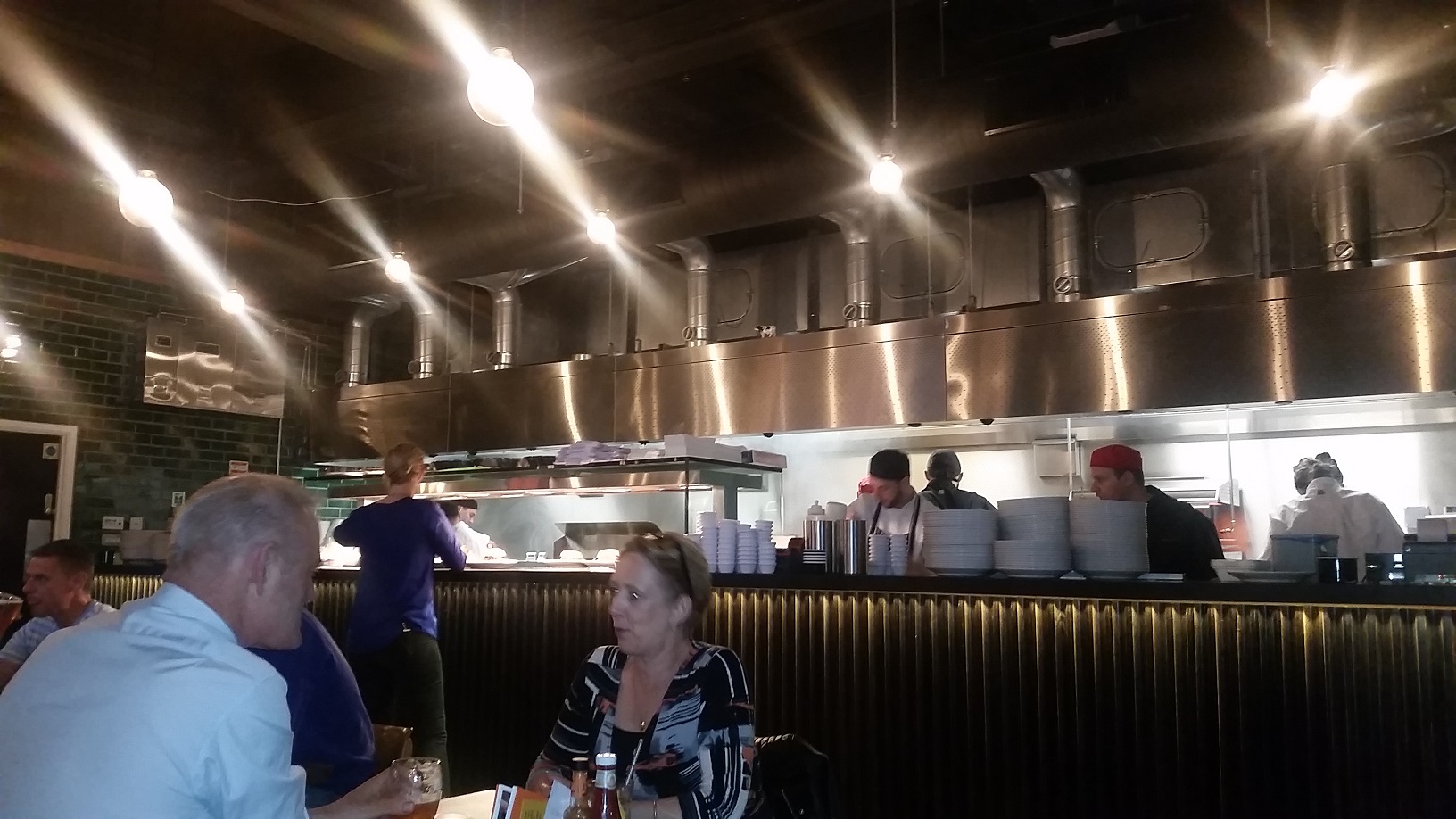 I’d suggest booking in advance and scoring one of the booths in the window so you can taunt the people lining up with your comfy seat and lush food.

We discussed at length whether there was room in town for the likes of Fat Hippo AND Byron but as both excellent restaurants offer something different at a different market – there really is room for both burger giants.

Don’t forget to visit on October 6th when you can get a burger for 25p!!!

You can view more of our Food content HERE