When purchasing a new Land Rover or Range Rover you are given a Land Rover Owners Experience Day (£225) held at one of the Land Rover accredited off roading sites across the country. For us, Yorkshire was the closest so we found ourselves booking a midweek stay at the Coniston Hotel who host the site. You can read a full review of our stay HERE.

On arrival, we were welcomed by friendly staff and shown to the abundantly supplied waiting area. After a quick cuppa and obligatory custard cream, our tutor for the day came to collect us. We felt instanly at ease with our instructor and Katie was fully included just as much as I was.

As I had just bought a brand new Freelander and I am new to the Land Rover family I chose to do the Land Rover Owners Experience Day in the same model so that I could really find out what the car can do – without breaking mine; I am well aware of the merits of the Freelander on paper but I really wanted to put it through it’s paces in person! Of course Katie would have chosen the Defender. I’m sure if you cut her in half, she’d say Defender through the middle.

The instructor got us settled in the car and really went through what we wanted from the day. Fun or facts. Naturally we wanted a bit of muddy madness thrown in but I wanted to understand the terrain response system, downhill decent and the traction control. Most importantly when to use it both on and off road. We both drive our 4x4s so this was what we were taking notes on!
As expected, within minutes we were learning features and facts that the dealership would never have time to pass on. Like how to drop all of the windows from the remote and where to store the parcel cover and headrests when the seat are down. Small yet invaluable as a new owner! 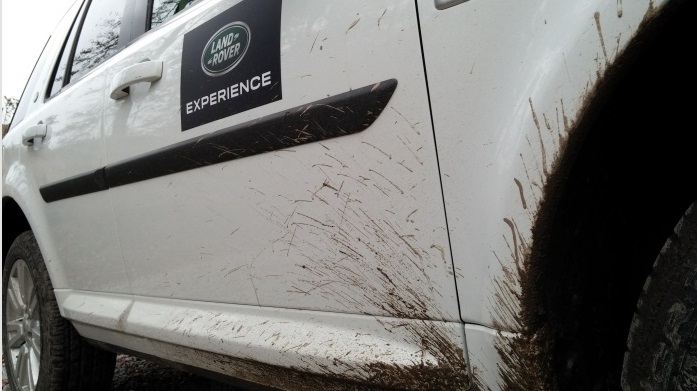 Out on the roads, we went on a beautiful scenic country route to start putting the car to work. We started with the affects the terrain response system has on general driving. The Grass Gravel Snow mode is incredibly impressive to use and contrary to popular belief it comes in to it’s own on wet roads/puddles as it improves the handing of the car. He also demonstrated the ‘emergency stop’ function – applying the electronic handbrake button when driving, even with my foot on the accelerator, brought the car to a controlled stop which includes flashing the hazard lights to warn other road users. 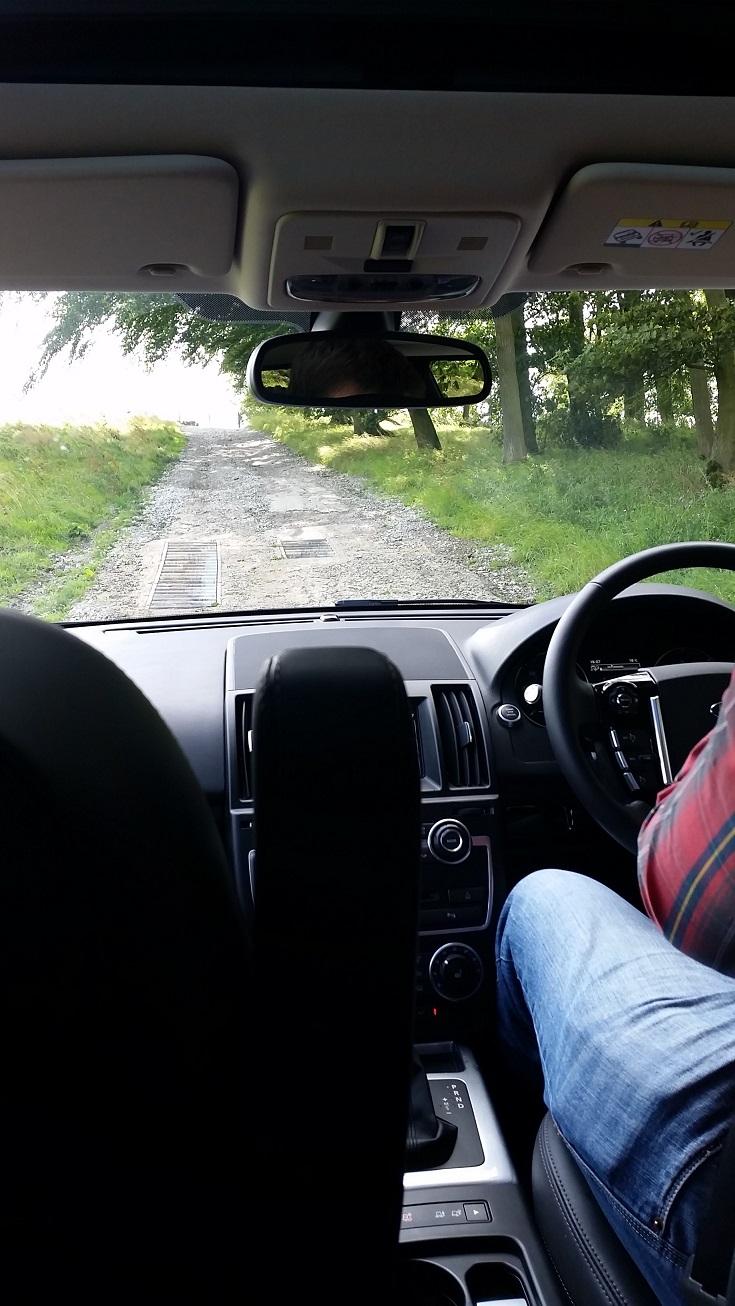 We then came to the off road portion which included some rather deep wading and creating bow waves which is always fun! With standard road tyres the car is extremely impressive – controlling itself with the downhill feature, even with just 1 wheel traction. It’ll climb the same hill with ease with that same 1 wheel traction. 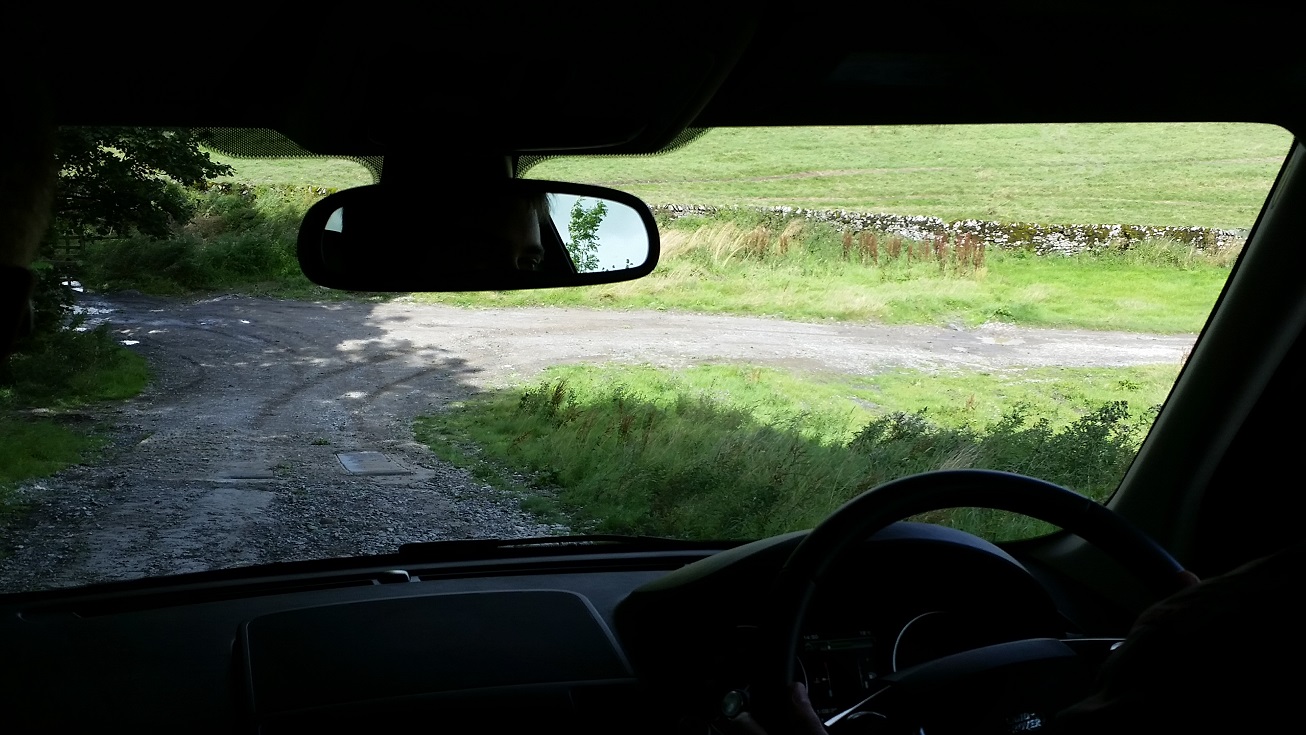 The next stage was purposefully designed show axel articulation, which for a car that spend most of its life on tarmac road is excellent and where traction control really excels, by locking a wheel after 1/8th of a turn if it has no traction. This would allow you to continue driving even if 1 wheel per axel is completely off the ground. 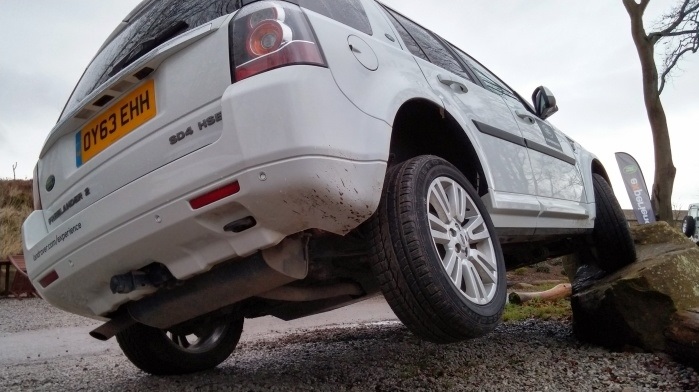 Our Freelander’s final task of the day was by far the most impressive. Cresting a downhill section at 45 degrees was a bit nerve wracking, especially as the bottle of water on the dash acted as a stark reminder that the front of the car was tottering in to nothingness! We had us stop part way down with the foot brake, engage reverse and take our foot off the break. It was certainly a true moment of trust but we needn’t have worried; the car held steady. Foot back on the accelerator, the auto brake released and off we went up the hill backwards.

With that feat of automotive wizardry over, we returned to base as 2 very, VERY happy Land Rover owners feeling confident and content that the right decision was made. The Land Rover Owners Experience Day has firmly bonded us with the Land Rover brand especially as Katie comes from a Land Rover loyal family ( Series I, Defender, Freelander and Range Rover).
Frankly, both the experience day and the car are an absolute bargain!
All we need to do now is get Katie in to a Land Rover and all is well!