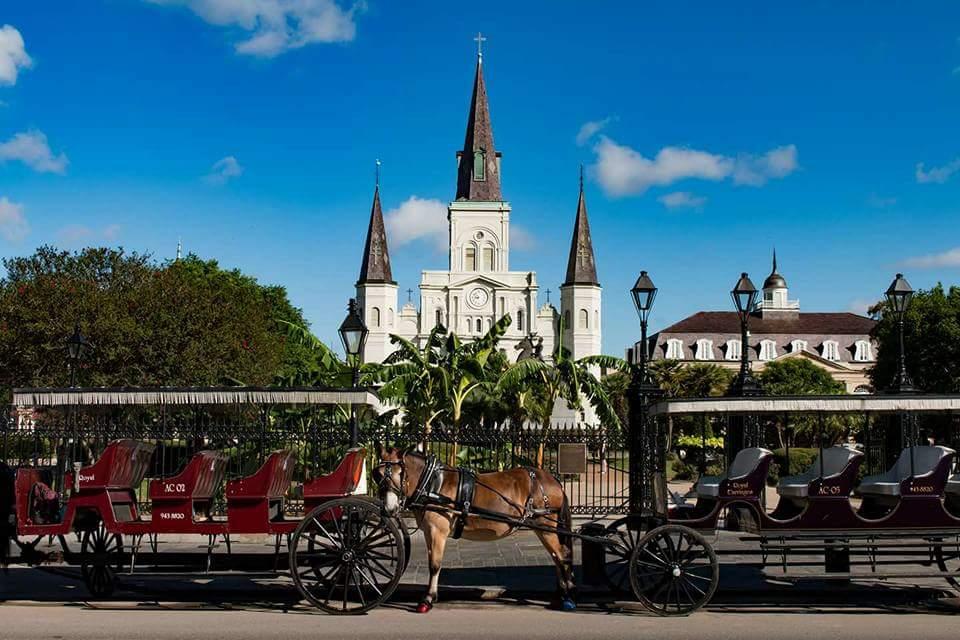 When we found out we’d be in New Orleans 4th July, we were a bit nervous about what to expect. Would there be a Deep South welcome for us or would be stand out like a sore thumb on Independence Day? There was only one way to find out!

Spirits were high in NOLA, the Crescent City, from the moment we stepped outside in the morning right through to bed time in the early hours.

Decorations adorned the French Quarter balconies, red white and blue beads were being handed out and a full days of activities and celebrations were planned. Being outsiders to the city, we researched and made a plan. 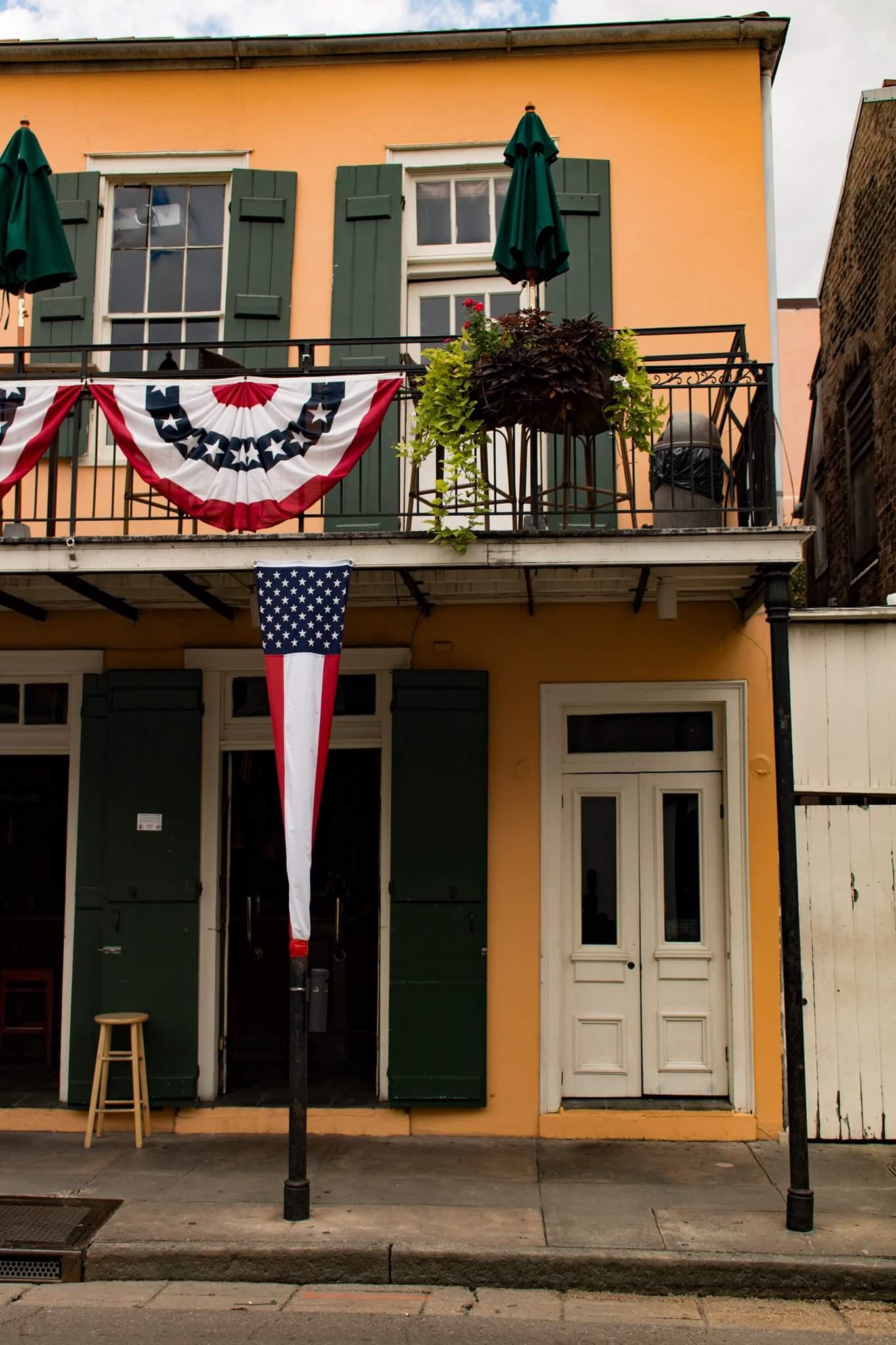 To start our New Orleans 4th July we hopped on to the Natchez paddle boat to take us on a guided tour down the Mississippi river. Baking in the summer sun, we listened to the informative and fun commentary as we cruised up and down the river. We took in history and culture of the Crescent City and enjoyed the on-board entertainment – a live jazz band!  Sitting on deck on our festive red white and blue paddle boat, we chatted to other Americans and tourists about the hot things to do in New Orleans. We even found another Geordie.

The cruise gave us an opportunity to scope out a prime spot on the river bank to catch that nights fireworks. 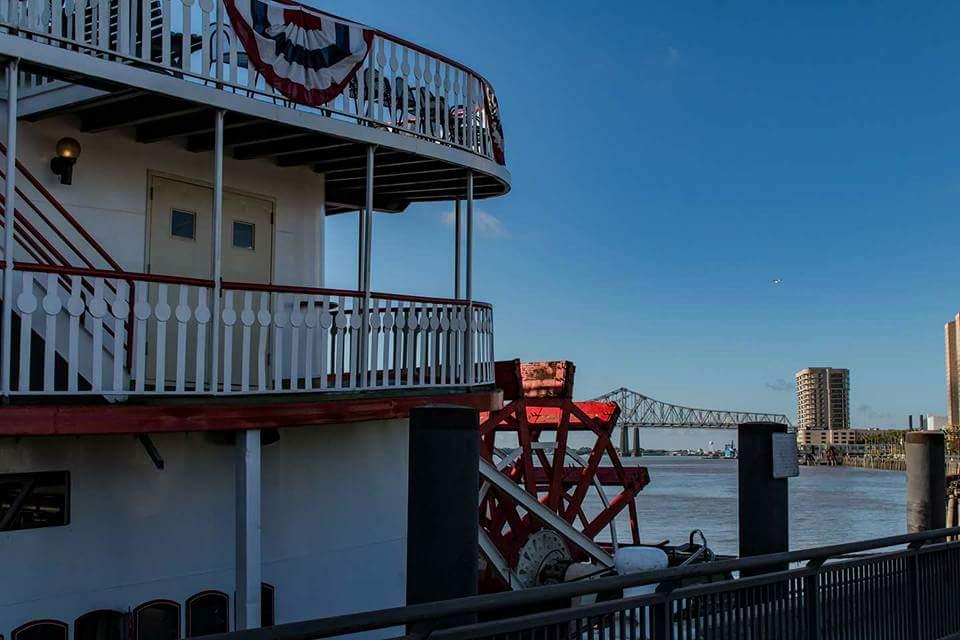 We were a bit worried that New Orleans 4th July would be a bit too full on for us but it was a really great atmosphere. The already friendly locals just seemed to turn that up even more on the day. Everywhere had a party vibe – anyone was welcome! 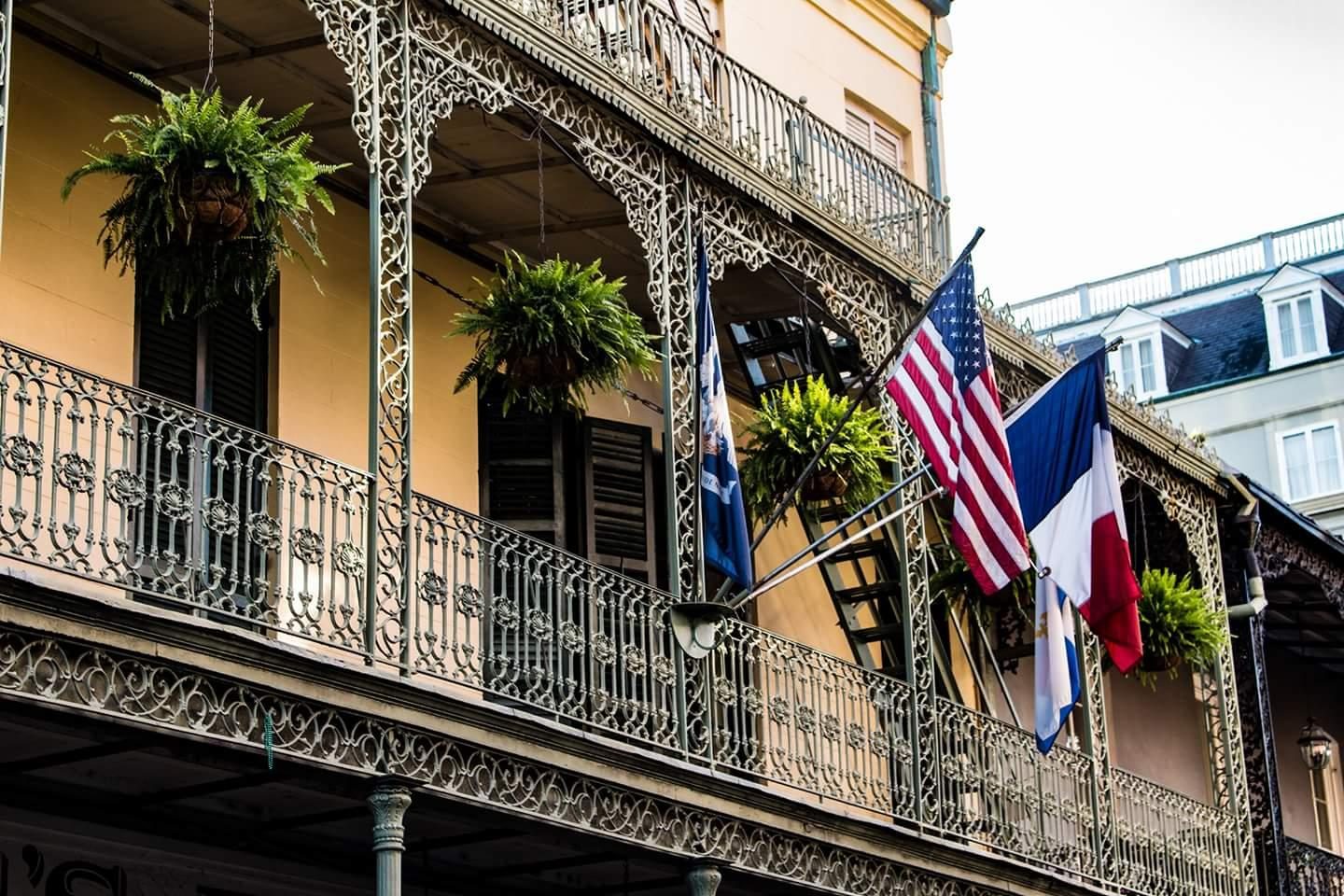 Muriel’s on Jackson Square was our first port of call before the fireworks. We opted for a modern take on Creole cooking in the haunted building before enjoying drinks on the balcony overlooking the party goers. They do love a good balcony here in New Orleans! 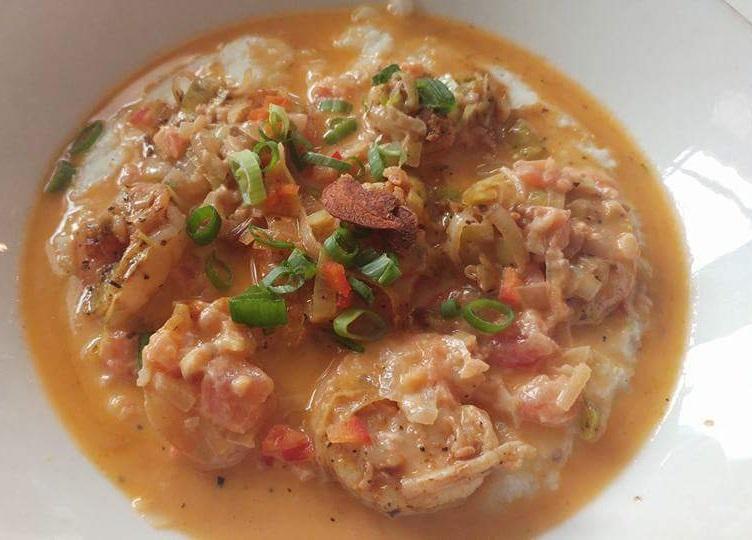 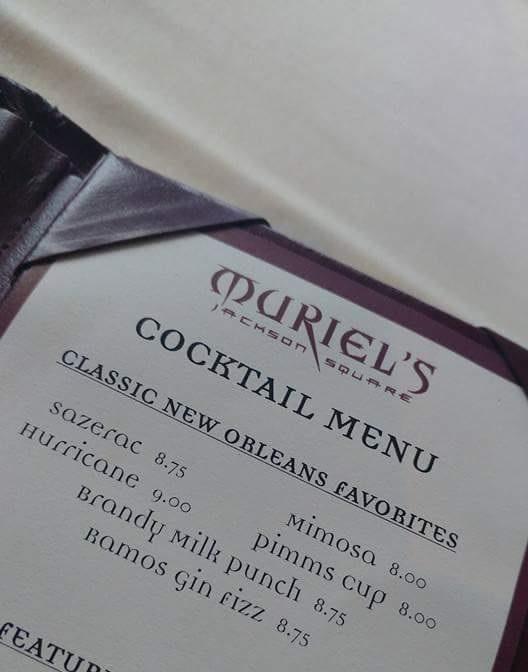 As darkness approached, we headed down to the banks of the Mississippi river to back a top spot. I think most of the city’s population were already here. Deckchairs, loungers and party coolers filled the banks as far as the eye could see. The vibe was electric and the main thing we remember about New Orleans 4th July. 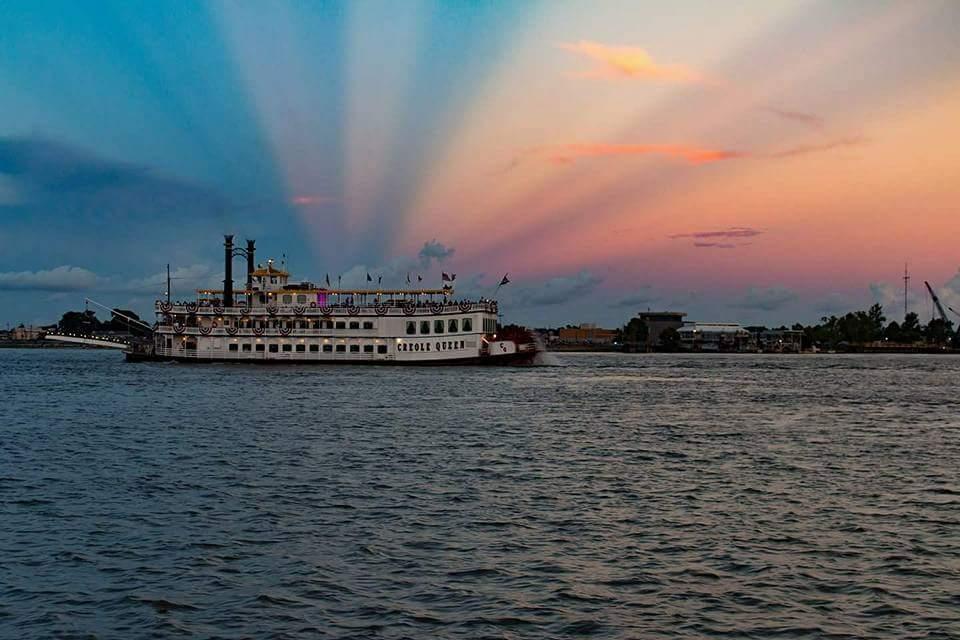 We clambered down on to the rocky shore, claimed a comfy boulder and settled down for sunset. We were rewarded with one of the most beautiful sunsets we have ever seen. The paddle steamer moved perfectly across the river. 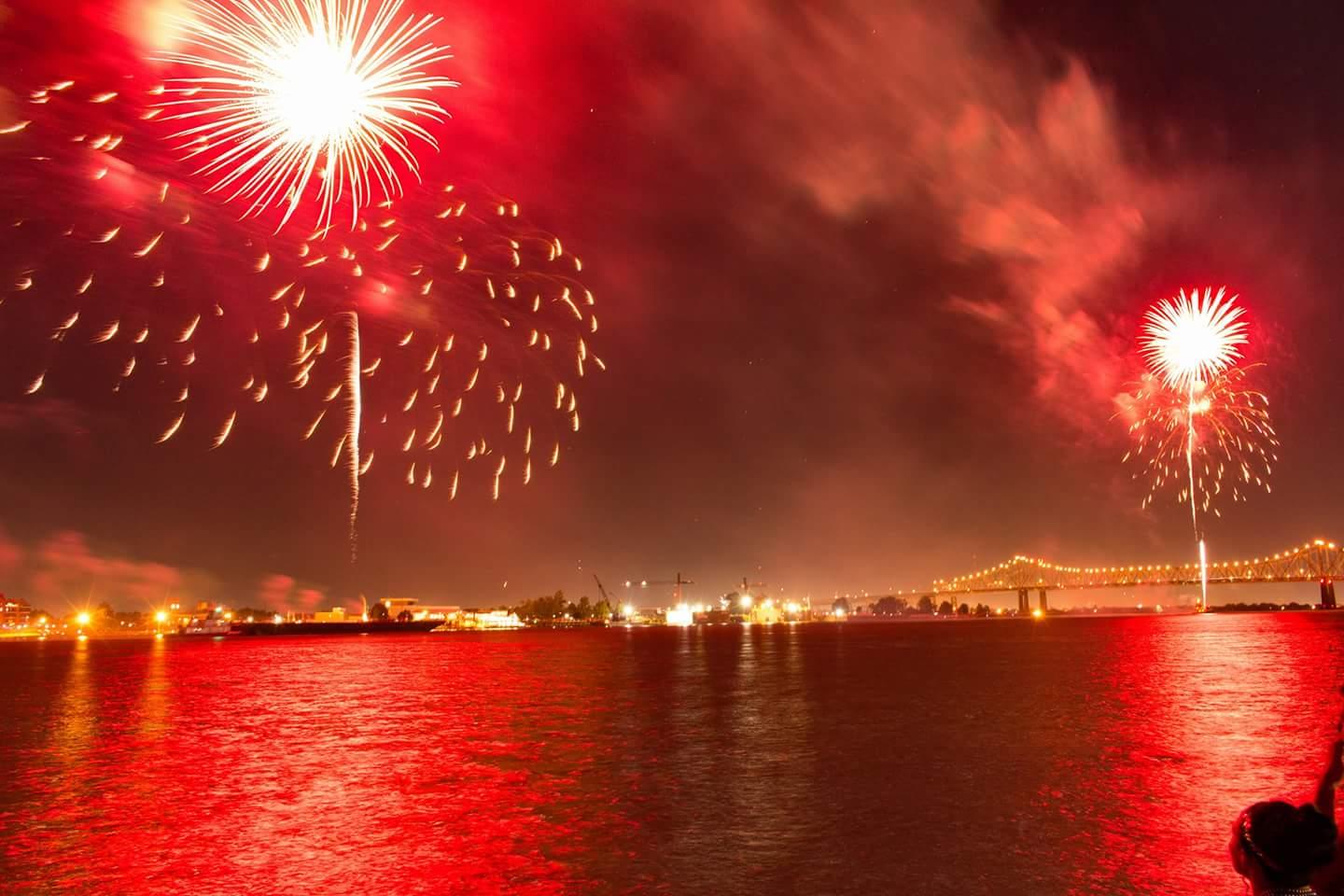 The fireworks. Where do I start with the fireworks? We were expecting a huge display for New Orleans 4th July and whilst the whizzes and bangs were great from the 2 duelling barges on the river, we were expecting some music to go with it. It definitely lacked some music. Maybe we were spoiled by the London New Years Eve display. 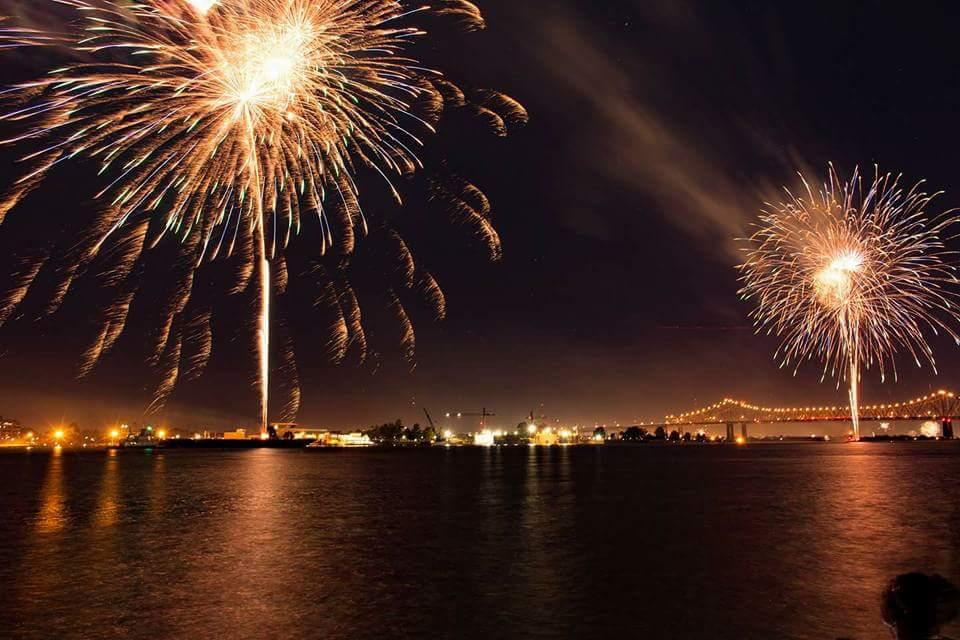 We had a great day in the city for New Orleans 4th July and we would wholeheartedly recommend it to anyone. It was a great welcome and a great introduction to the city, the South and the friendly folk.