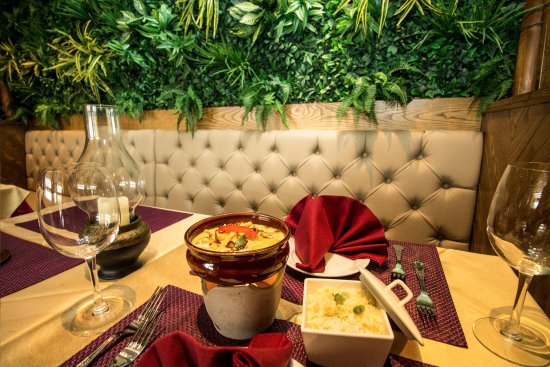 Back in September I bought a Living Social deal for our favourite Thai restaurant in Durham. The Star of Siam is based in the Highfield Hotel which is about 10 minutes outside of the city centre, on the side of the A690. Set back from the dual carriage way on a slightly elevated plot, the view from the restaurant is great on a clear evening… not so much in a pitch dark November!

We have been here to The Star of Siam many times before and always enjoy the visit. The staff can never do enough to help you and the whole ambience is very relaxing. Tables and guests are a good distance away from each other and the cane furniture makes you feel like you are on holiday. The large water feature in the centre of the space does help with the mood… and it always makes me need the loo!

Mr Tramp chose the Tod Man Pla Fish Cakes (£5.10) to start. 3 small, flavourful fried patties were served with a delicious sweet and sour clear based dipping sauce. The sauce was delicious and very garlicky! The garnish was a bit over kill and maybe another patty wouldn’t have gone a miss but it was very tasty. 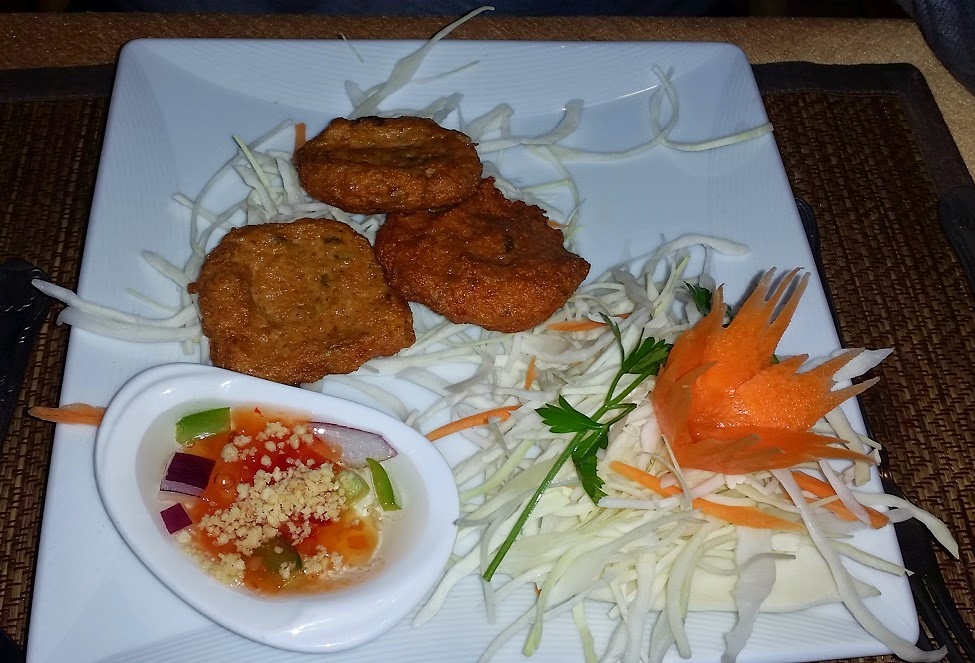 I chose the Chicken Satay (£5.10) as always. The peanut sauce was thick and crunchy and the perfect accompaniment for my 3 skewers of chicken. I too had a clear sweet dipping sauce too. Mine was so tasty I finished it with a spoon! My only criticism was that my chicken was barely warm. Just off cold. It was cooked all the way through but it felt like it had been either left standing or not reheated enough which is a shame as I have never had this issue here before. 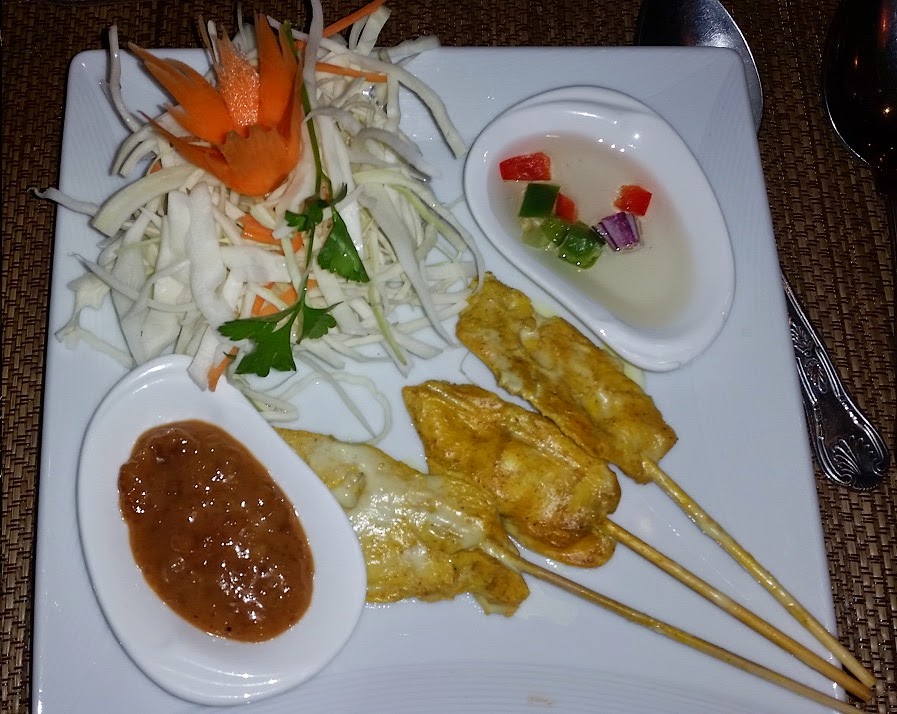 Mr Tramp opted for the Jungle Curry (£9.70) purely based on it having 3 chillies next to it for heat factor! Served in an earthenware bowl, the curry was very runny and almost soup like which is probably due to it not having a coconut base. Delicate flavours were layered with basil which gave a freshness to the curry. Neither of us thought it was hot enough to warrant a 3 chilli rating but it was very nice none the less. The bowl was packed with succulent pork and vegetables and was served with egg fried rice (£2.65) which helped soak up the sauce. 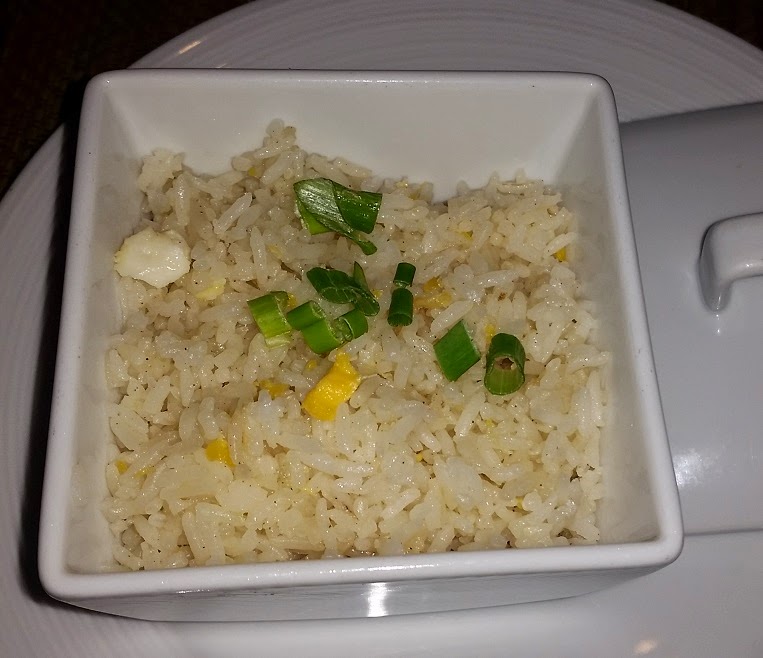 I opted for Kai Pad Med Ma Moung (£9.70) which was chicken stir fried with roasted chillies, mushrooms and cashew nuts. Those roasted chillies were bad boys! Woo, bit in to one and it gave me a kick up the behind – PERFECT. The chicken was ever so lightly battered and the sauce it was stir fried in really took on the flavour of the chillies. I paired it with Egg Fried Rice (£2.65) but it would have been just as good with noodles. 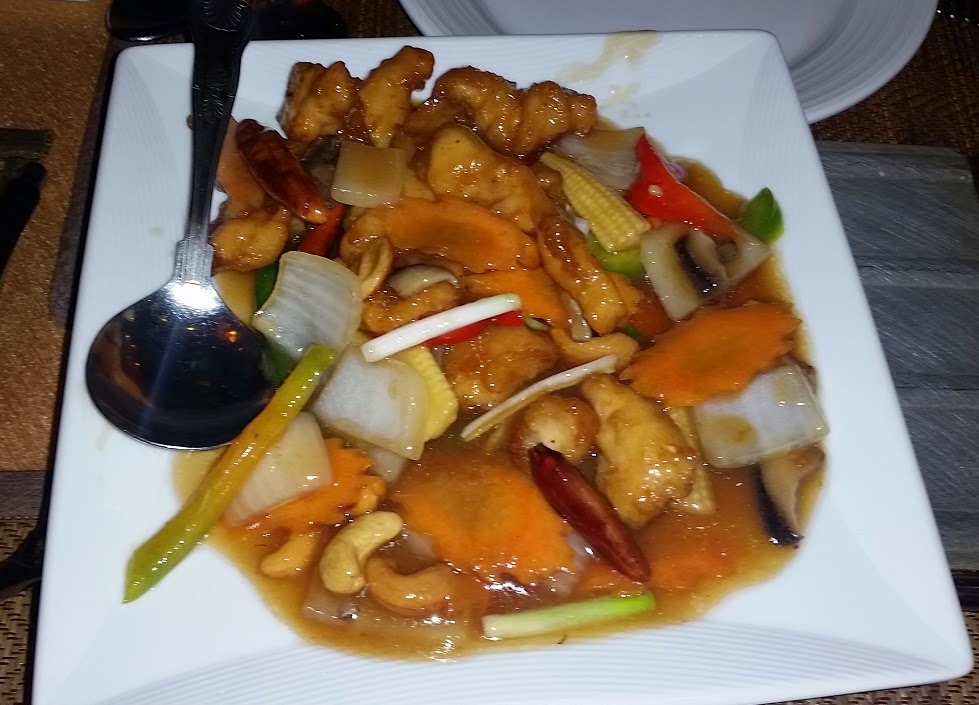 We did get a dessert, the Lumpy Bumpy Cheesecake but Paul was so fast off the mark he had demolished most of it before I even picked up my spoon!

For a Thursday evening, the restaurant was really starting to get busy around 7.30 onwards. Not only is the quality of the food consistently good, it is easily accessible from the A1, A19 and surrounding areas with plentiful free parking. Not something the restaurants in the city centre can match.

The Star of Siam at Highfield Hotel is very often overlooked as a lot of people don’t know it is there which to me is an absolute crying shame as it is just brilliant. Well worth the visit if you are in the area or just fancy a change of scenery.