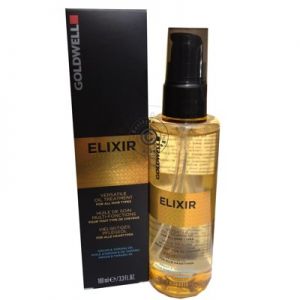 My poor hair has been getting a bit neglected of late. I have been so busy and not in the mood for pampering so I have been wearing it up in a pony or bun pretty much every day since mid August.

While I have probably been doing it a favour by not using any heat on it, I haven’t supplemented this with any extra treatments or caring for the ends while tying it up.

Goldwell Elixir Oil is a heady mix of Argan and Tamanu oils which is light enough to use daily, and even on my hair, more than once a day.

I have been quite dubious of the recent insurgence of hair oils. I have some pure Argan Oil, straight from source and my trusty Moroccan oil that I have been previously loyal too but it was time to shake it up a little bit and Goldwell, having such a high reputation as a salon brand, I have faith that this isn’t going to be crap!

With the Argan oil in this product, it provides my parched, dyed hair with Vitamin E and unsaturated fats, to boost the goodness in my hair, while Tamanu provides sleekness and additional antioxidants which my hair could be missing. The scent is quite delicate and not as offensive as some other oil offerings which makes wearing it quite easy as it won’t clash with anything else.

My hair is thick, curly, bleached and dry on the ends, with the top being pretty healthy so I always focus oil application on the ends. If I apply the oil to my wet hair, before drying I don’t feel like I am getting any extra benefit as they still look a little dry and coarse but when I apply the Elixir after drying and styling, as a finishing oil then it shines and comes in to its own.

Light enough to be used on the ends as a finishing oil, it really finishes my style off to a polished, groomed effect that I haven’t seen achieved with other oils thanks to it’s light but effective consistancy. It doesn’t bog down my ends and still leaves movement.

Each bottle is meant to last 85 applications with 1-2 pumps used per time and I can see this bottle lasting a lot longer than say Moroccan oil as less dispensed, making the £20 RRP a very reasonable price.


Goldwell Elixir is available from all Goldwell approved salons