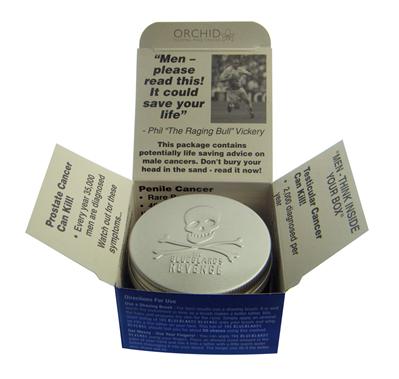 My husband, Mr Tramp, is a Bluebeards man. He likes to feel a bit pirate-y when he has a shave thanks to their cute skull and cross bones designs. With that in mind, when Nick over at Bluebeards sent me a press release yesterday, I couldn’t NOT post it.

Ladies… if you love your man…. help him “get to grips” with himself. For peace of mind AND health.
37,000 men are diagnosed each year with a male specific cancer yet a quarter of men still never check their testes

With ‘in his face’ on-pack advice and information encouraging men to be aware of the early signs and symptoms of the three male specific cancers – testicular, penile and prostate, not only will your man have a great shave but he’ll receive potentially life-saving daily reminders to check himself out and seek advice from a GP as early as possible.

The campaign has been launched after a survey commissioned by Orchid revealed that three quarters of UK men (73%) recognise that a lump in the testes could be a sign of testicular cancer. However, as many as 25% still never check their testes and 50% of men would prefer their partner to check them rather than their GP. Testicular cancer is the most common cancer amongst young men aged 15-45 and if caught early enough it has a cure rate of over 95%.

The survey of 824 UK adults aged 16 and over, carried out by leading market research agency GfK NOP, also found that nearly one in three (30%) are not even aware they can check themselves for lumps. This is in stark contrast to women, who are more likely to take their health in their own hands – only 7% of them say they don’t check their breasts.

Phil said he was delighted to put his weight behind the campaign. The former England prop explained: “Male cancers don’t receive enough coverage and awareness and far too many men aren’t proactive enough in seeking help if they have any concerns. That’s why I’m backing Orchid’s awareness messages on The Bluebeards Revenge product range to promote life-saving checks and to encourage men to stand up and take action.”

Rebecca Porta, Chief Executive of Orchid, said: “We are delighted to be working with The Bluebeards Revenge for 2012. This is a wonderful opportunity to encourage men across the UK to take a pro-active approach to their health and general well-being whilst raising funds and awareness of Orchid and male cancer.”

David Hildrew, Managing Director at The Bluebeards Revenge, added: “Our range is all about providing a great shave but we are also taking on the added responsibility of educating men on the early symptoms and signs of testicular, penile and prostate cancer. We are encouraging men to think inside their box.”

Formed in 1996 by former testicular cancer patient, Colin Osborne, Orchid is the only UK registered cancer charity to focus entirely on the male-specific cancers; prostate, penile and testicular.

They offer support and information to people affected by or interested in male cancer through a dedicated medical research programme, education and awareness campaigns and a range of support services.

Please circulate this to the men in your life. I have.