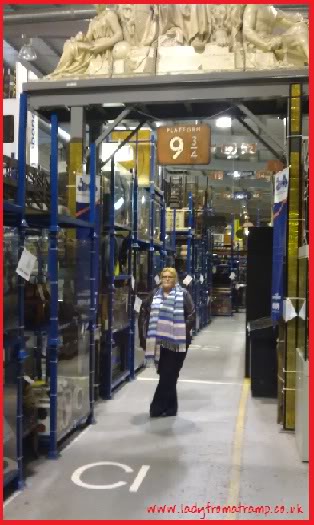 Hello Lovelies,
Hope you have all had a good week and an especially good weekend?
Mr Tramp and I had a lovely weekend and we left the area for the weekend and I thought I’d share a couple of snaps of the highlights…. and when I say highlights it mostly involves me looking like a drowned rat and scared!
1.Toot Toot! All aboard the Hogwarts Express!

Couldn’t resist having a quick snap under the sign!! Ive seen the actual train before in Durham but just had to pose with this now didn’t I?!
I know my pashmina makes oddly look like a Rabbi but i’d been carrying on with it and slung it back on for the photo… i didn’t realise it looks quite so dodgy! Also, cross legs with jeans and boots on is not a good look for me!
2. Friggin’ in the metal riggin’

This was terrifying. I’m not usually bothered by heights but we went on a one of those London Eye, millennium wheel jobbies and as Saturday was a horrid day weather wise, it was torrential rain and super strong wind. The pod stopped at the top for 10 mins or so to let people below on or off and i’m not ashamed to admit I cried. Thankfully it was just me and Mr Tramp in the pod. We were being blown all over!
I think the commentary said we were either 60m or 100m in the air… either way it was a bit too high for my liking on such a windy day!
I oddly felt safer when I was looking out over the mechanisms rather in to thin air! I guess I watched too much Beverly Hills Cop & Final Destination!!
3. Turtle-y scared

You might only get the turtle-y bit if you are aware of the Geordie & Ashington accents. That’s how an Ashington person would say totally!
This was on our 3rd revolution. I had shrunk down and retreated in to my pashmina like a little scared turtle! I had started the day with beautifully big bouncy straight hair but of course the dampness and rain brought out dreadful ringlets so i’d thrown it in to a bun and left my fringe to do it’s own thing. Note the smudgey mascara from the drama-rama terror!
Genuine Leather biker jacket is from Simply Be!
4. Eye Spy with my big mechanical eye

This is the view from the top. I got brave on the 4th revolution and took pictures while we were at the top.. and the wind had stopped gusting!
5. Don’t let the sun go down on meeeee

This was as the sun was finally making an appearance just in time for setting. Mr Tramp looks so, absolutely, gorgeous highlighted by the sun in this way. I was lucky to have caught it before the pod moved again. Also ladies, look at those eyelashes… the jammy sod!!
6. I’m a model, you know what I mean?

Just because my kitten was so intrigued by the Canon strap on my camera he was letting me snap some pictures of him. I think this one is absolutely stunning. He’s called Barney after Barney Stinson from How I met your mother… although Dr Oppenheimer and Zazzle from Big Bang Theory were close 2nds!
Not a very varied set of photos but between holding Mr T’s hand and weilding my umbrella, I didn’t get much snapping done!!
I had fun putting this together. What do we think, more What Katie did? Yay or Nay? Love to know….