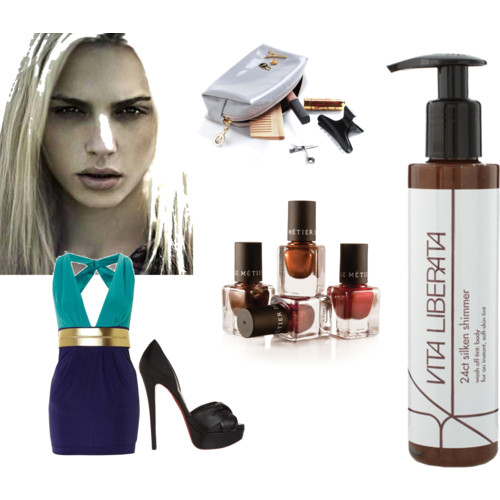 Recently, an email hit my inbox from good old Superdrug and it really intrigued me. As a LTR’r (Been with Mr Tramp for 10yrs in December, and married for 5yr in October) I have never really been in this position, needing to reinvent myself after a break up to cheer me up or put me back on the right track. I do know girlies who have done this though. Saying that, I did get 20+ piercings after one messy break up as a teenager… just because he hated them (don’t ask… seriously!!)
It got me thinking, I have had several “reinventions” over the years but they have mostly been career / lifestyle orientated and probably add up to the same amount as a broken hearted new look.
On landing a huge promotion, I subconsciously found myself swapping my (awesome) white blonde hair for a chocolate brown, losing the day glo nail art for soft neutrals and smartening my work appearance. I didn’t really notice I was doing it over time and it wasn’t until a colleague mentioned it did it hit home. I was working with people (and other managers) who were still wearing casual clothes within IT but I somehow felt like I needed to polish up in order to be taking more seriously.
I also did the same thing the last time I hit the job market, toned my hair down etc etc to put me in the best position. Funny isn’t it!
Few of my friends have also had huge overhauls when they have met new groups of friends, drastically changing their entire appearance / wardrobe just to fit in. Sheesh, that must cost so much and be so hard to keep up?
THE HAIR RAISING COST OF BEING DUMPED

– new Superdrug research reveals the cost of a woman’s post break-up reinvention –
The average single female spends £500 on reinventing herself after being dumped, it was revealed this week.
The findings emerged in a new study, commissioned by Superdrug, of 2,000 women who have found themselves picking up the pieces after a boyfriend decided enough was enough. More than half of those polled admitted they had at some point completely revamped their appearance after an ex-partner left them feeling unwanted and unattractive.
As such, ditched damsels splash out the best part of £496.66 on hair-cuts and colours, a new wardrobe of clothes and shoes, gym memberships, spray tans, make-up and manicures. But three quarters of ladies admitted the reinvention was worth every penny – as they felt a million dollars afterwards.
Simon Comins, Superdrug Director of Toiletries, which commissioned the research, said:
“Being dumped, whether it was on the cards or not, will make even the toughest woman feel awful. This research shows that women start to question what went wrong with the relationship, and feel self-conscious about their looks. So indulging in a new hair-do, a change of hair colour, beautiful bronzed skin and a lovely new wardrobe of clothes can be just the tonic for those who have been heartbroken.”
The study shows jilted women will spend approximately £91.82 on their new hair style – which includes a new cut and colour. To achieve that “just stepped off the plane” look a further £39.41 is spent on spray tans, while luxury manicures and pedicures cost £51.69.Girls who decide to treat themselves to a nice new make-up kit splash out £48.68 on nail varnishes, lipsticks and mascaras. And the new wardrobe – which includes clothes and shoes – sets most back around £183.48. Finally, a fifth of ladies say being dumped is just the incentive they need to do more exercise – and as such spend £81.58 on gym memberships.
Incredibly, the survey found six per cent of all dumped women had even turned to cosmetic surgery – costing in the region of £530 – in a bid to feel sxier following the end of an important relationship. While 14 per cent immediately went on a diet plan to lose the pounds they had gained during the comfortable period of their previous relationship.
But women don’t just spend money on reinventing their image. The survey shows getting back out onto the dating scene also costs a pretty penny. The average single female estimates she spends £70 a week on socialising with friends, on top of the £500 she has forked out on her appearance. And 11 per cent of ladies have even paid around £47 for subscriptions to dating websites, in the hope of finding love again.
Simon Comins of Superdrug continues:
“Life as a single person is far more expensive than when you are part of a couple. So as well as spending more on the upkeep of your appearance, you automatically spend more on socialising with friends. Luckily you don’t need to splash out and spend so much money on hair and beauty, though admittedly retail therapy may make a woman feel better. We’ve seen sales rocket of home hairdressing DIY kits, and home manicure sets as women look to get the salon experience at home.”