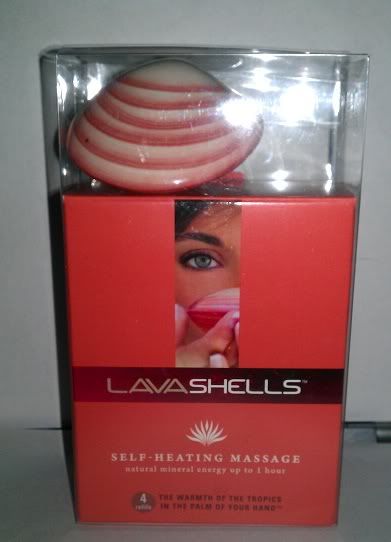 After the buzz about Lava Shells as a result of The Apprentice, I felt compelled to give the lava shells a try. I have seen many salons and spa’s offering a lava shell massage but have never really looked in to finding out about it. I finally bit the bullet!
I have to say, I tried this with great trepidation. I love a professional massage and melt in to the bed when hot stones are used – bliss – I didn’t want an at home treatment to, well almost ruin that for me, if you get me? To help me fully review this kit, I did enlist the help of my glamourous assistant (Mr Tramp) but he said I wasn’t allowed to include any ‘action shots’ of him spread-eagle on the bed covered in oil – which is fine, this isn’t a rude site eh, I’ll keep those shots for ‘personal consumption’ 😉
The packaging of the Lava Shells is pretty bland and utilitarian but I wouldn’t buy it for the packaging right? It’s not one to be kept on display in the bathroom in the box lets say! All the individual components are all clearly separated and labelled which is great considering you actually have to do a bit of DIY alchemy to get the shells to activate. The instruction booklet is nice and clear offering both pictures and words. I liked this touch as one persons ‘simple’ instructions is another persons’ war and peace but you can rarely go wrong with pictures.

The kit includes 1 Lava Shell, 4 heat pad sachets, 4 activators and 4 ampules of organic massage oil. This kit costs £35 but don’t worry, you can buy extra refills once you have worked your way through this lot (£25 for 4 more charges plus a bottle of oil). Each shell, once ‘charged’ lasts around an hour so you get plenty to comfortably give 2 good back massages before needing to worry about cooling down. The refills are quite pricey at (PRICE) but it still works out cheaper than going to a salon. I have to say I am quite disappointed that there is only 1 shell in the kit. Most massage techniques use 2 hands, so only including 1 shell is a bit silly, even if the price was slightly higher, I’d rather have had the two shells. I suppose this could be a marketing ploy to sell more, who knows.

The preparation of the pads and shell is simple and quick with a lovely lavender aroma which Mr Tramp said was quite soothing. The aroma does linger while working the skin with the shell, combined with the light scent of the oil, it makes it quite pleasant to be giving the massage as well as receiving! I’m not keen on the oil, I thought it wasn’t as pliable as massage oil should be to give good coverage of the skin you’re working. We tried 1 massage with the supplied oil and 1 without and you really do need some kind of lubricant (oo-er!) as the shell just drags and becomes uncomfortable without something to slip over, but for the interests of testing we tried both! We rated the oil with the kit as quite poor, but good for being included.
The shell doesn’t get as hot as we were hoping for but it is a definite warm experience. Not as hot as ‘hot stones’ but lovely nonetheless. We did find that if we left the shell on the side for a couple of minutes and then came back to it it was much warmer and it felt more effective. Again, if there had been 2 shells in the kit it would have been so effortless to swap from each shell while the other one came back up to temperature.

Once we’d finished and came to removing the hot pad, it was funny to watch the pad steaming away on the side of the bathroom sink! The shell was easy to rinse out and dry ready to go back in its box. On a side note to the packaging, it would have been great if there was a small box or pouch in the kit in which to keep the shell in between uses as I don’t think the clear plastic tab holding the shell in place in the flimsy box is going to be strong enough for storage. You certainly couldn’t stack anything on top of it in a cupboard.
We narrowed our review down in to bullet points…
Good :
Aroma
Instructions are clear
Oil included
Bringing salon treatments in to the home
Shell is pretty enough to be left out on a bathroom counter
Bad :
Only 1 shell
Poor quality oil
Not that hot
Packaging not sturdy enough for storage of fragile shell
I’m glad I have the kit and as it’s not something that will get used up that quickly, of course it depends how often you like your massages! It’s a great at home piece to supplement professional massages or even just ween you in to going to a salon to get you used to the experience, if you are a massage novice (as we all were once!). It’s definitely a home piece, I wouldn’t recommend it for budding therapists or mobile technicians unless they get 2+ shells or a bulk buying option is offered.

You can buy the Lava Shell Kit and further refills from www.sharedbeautysecrets.com
Alternatively, you can find out more about Lava Shells in the following ways :
Facebook
Twitter