Unless you are from certain part of Durham, the only time you have probably heard of Medomsley is it being the home of the ill fated Phileas Fogg crisps from yesteryear that revamped not that long ago.  Hopefully after you read this review, you’ll know that Medomsley is the home to a cracking country pub that you must visit called The Miners Arms.

Visiting the Miners Arms is a bit of a joke between us – we have been trying to buy a house in the village for a while but nothing has come up or we were pipped at the post. Rubbing salt in to the wounds of the epic local we could have, we headed over on a busy Friday night to taunt ourselves just that little bit more! 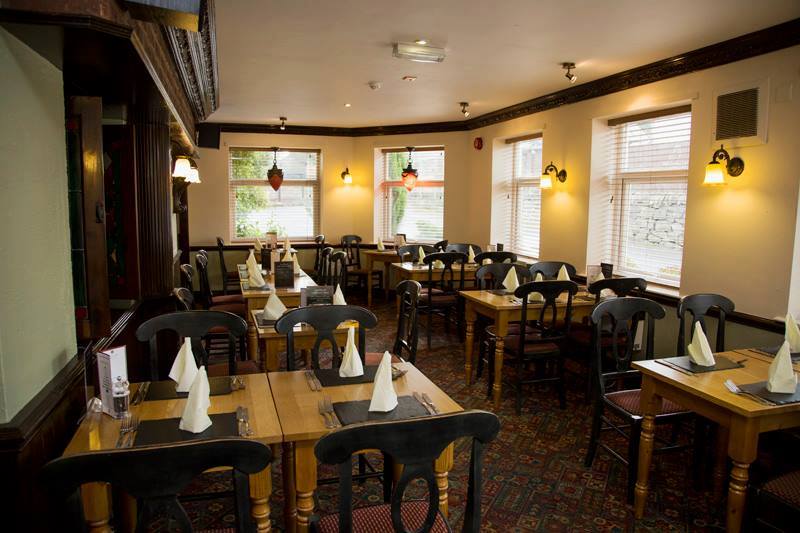 Having both dedicated dining room and space to eat in the bar area for a more casual approach, the busy country pub balances the popular food side with an even more popular local pub vibe for regulars.

With an ever changing specials menu and a pretty solid regular menu of pub classics, we were seated and greeted by Johan, the owner, who heads up a tight ship with his restaurant and bar team. 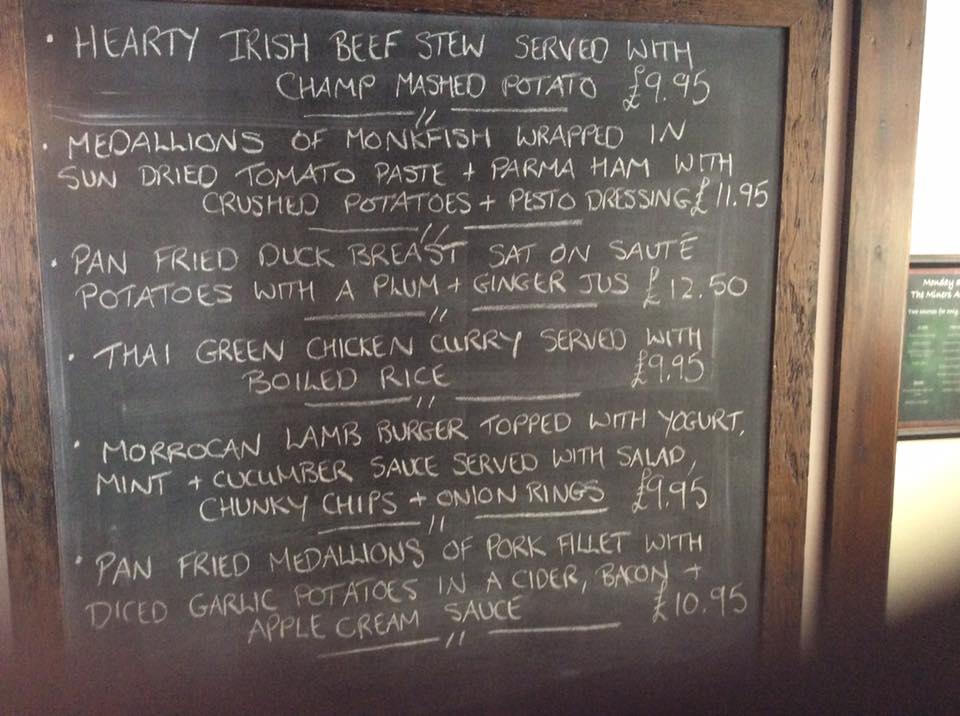 Paul being ever the creature of habit, he chose the Grilled Black Pudding and creamy peppercorn sauce (£5.45) to start. He’s had this the world over so it’s not surprise it was his first choice. Thinly cut, local black pudding was served up with the peppercorn sauce, a balsamic drizzle and unlike most others – a dressed side salad. The salad made the starter feel more composed and substantial. After 12 hectic hours in the office, substantial is just what you need on a Friday night! 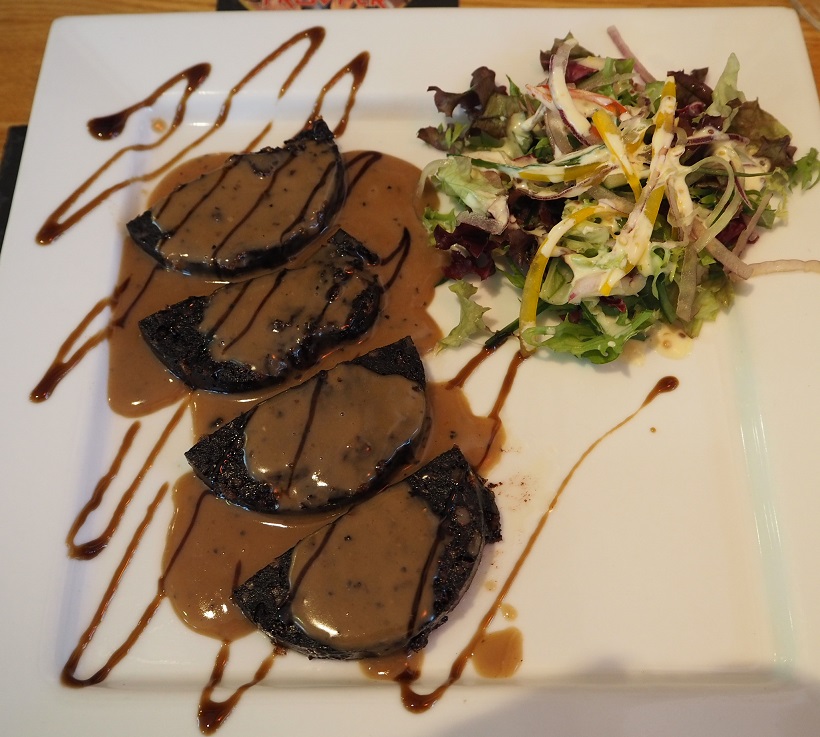 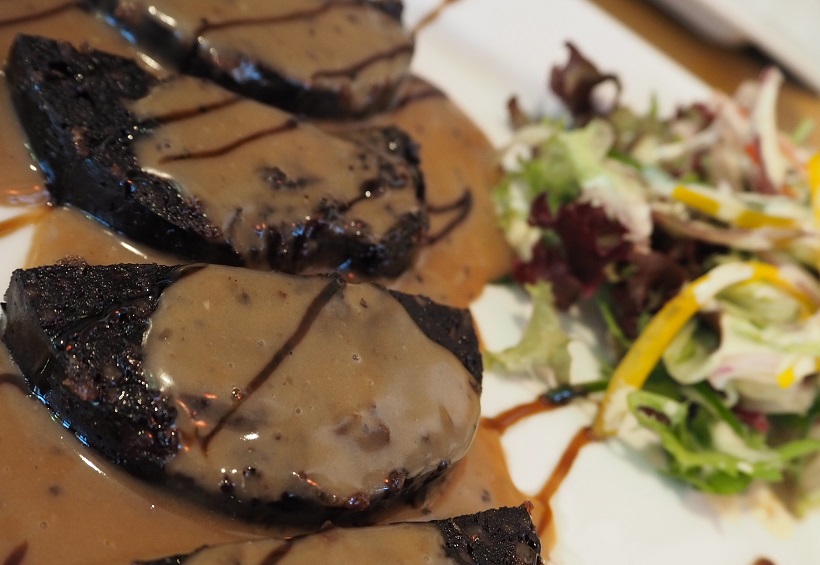 I went for the Classic Prawn Platter (£5.45) which whilst tasty and fresh, certainly lacked in the platter department. Ambitious title aside, it was however a good prawn cocktail again served with a dressed salad rather than the wet limp iceberg lettuce you usually get stuck with. The warm + toasted granary bun was a much more pleasant partner to the prawns than a couple of slices of ‘plastic bread’ as I like to call it! 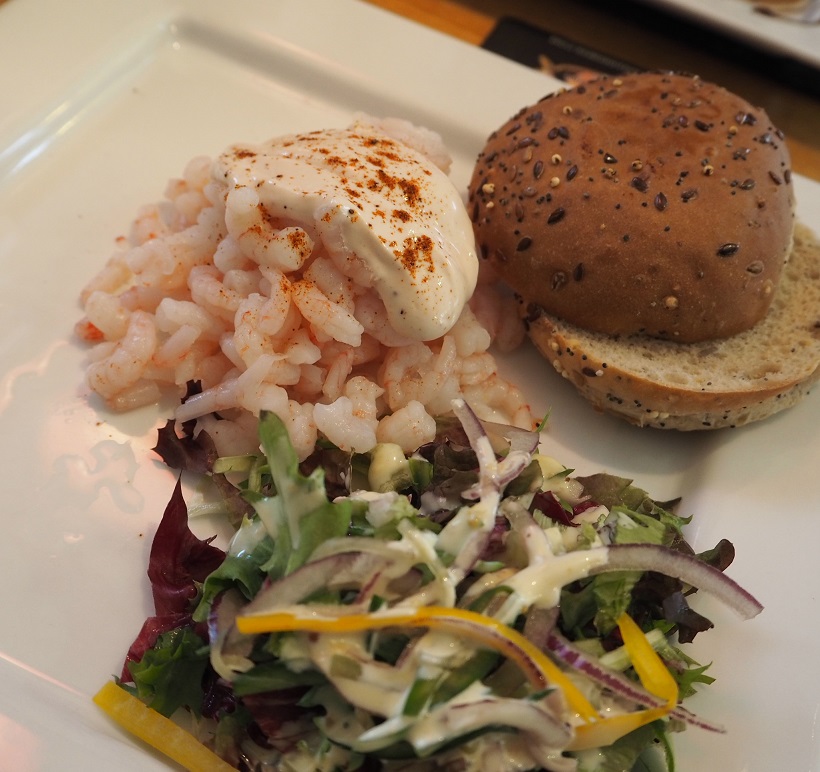 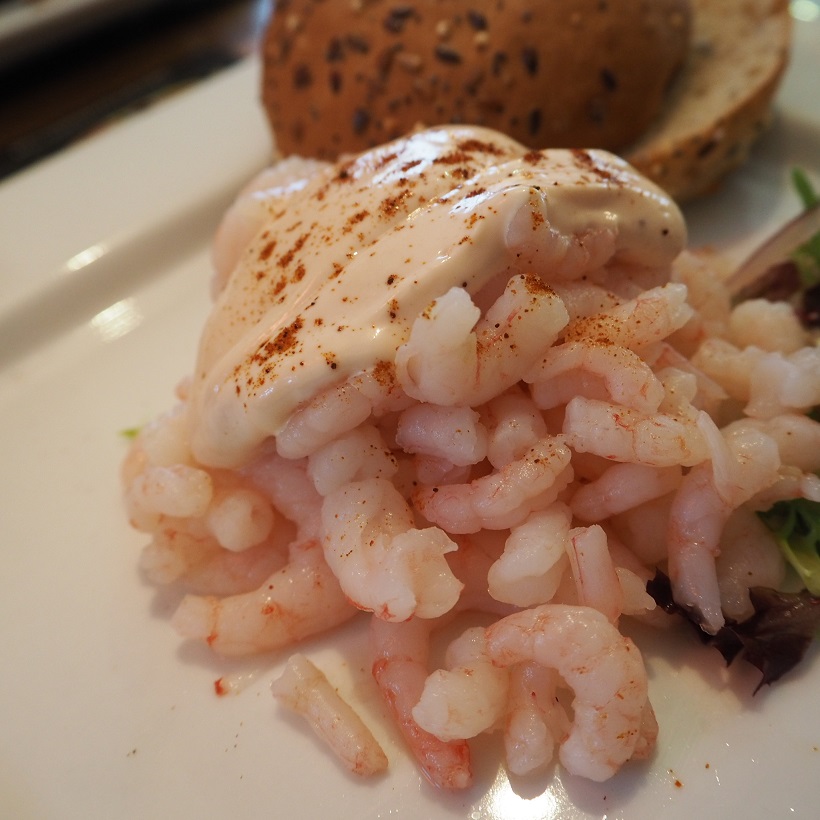 Both starters were fairly basic dishes but attention to detail and extra thought had been put in to them instead of just churning out bland. Seriously, a dressed side salad makes a world of difference in some pub meals – regardless of what food snobs may say!

Johan had talked us through the Specials board and we both chose from that.

The Hearty Irish beef stew with champ mashed potato (£9.95) hit the spot and didn’t last long on Paul’s plate. Certainly true to their word, the large chunks of beef were soft and tender as were the assortment of veg. The stew itself was incredible. A little bit boozy and so very moreish, and even though I loved my curry, I’d have snapped the chefs hand off if he offered to make me some. It was perfect for dunking some chips in, it was just lush, for want of no better word! 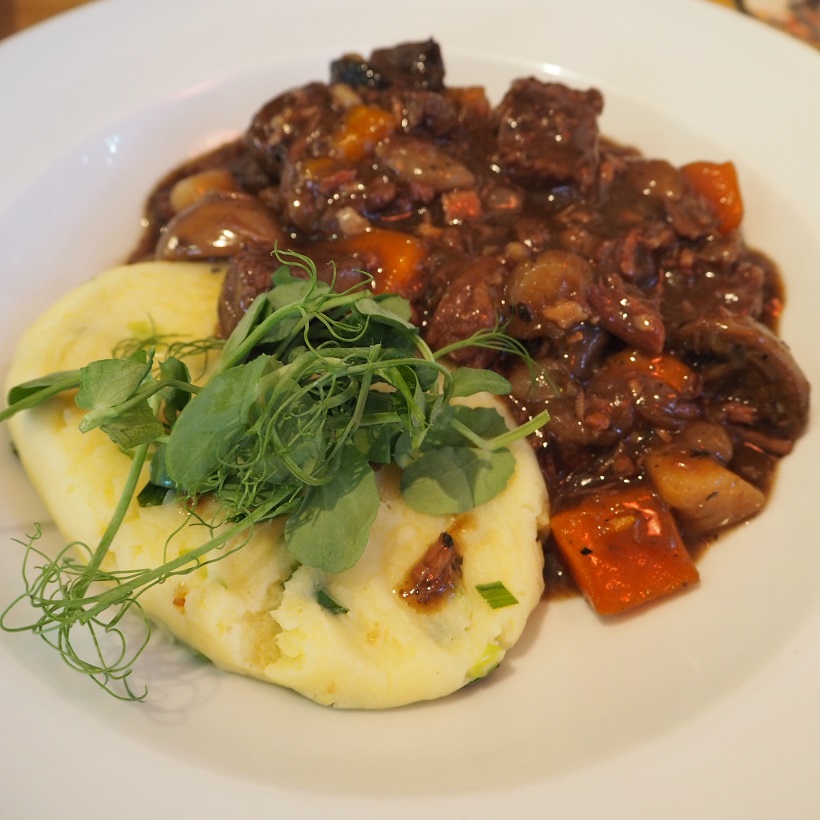 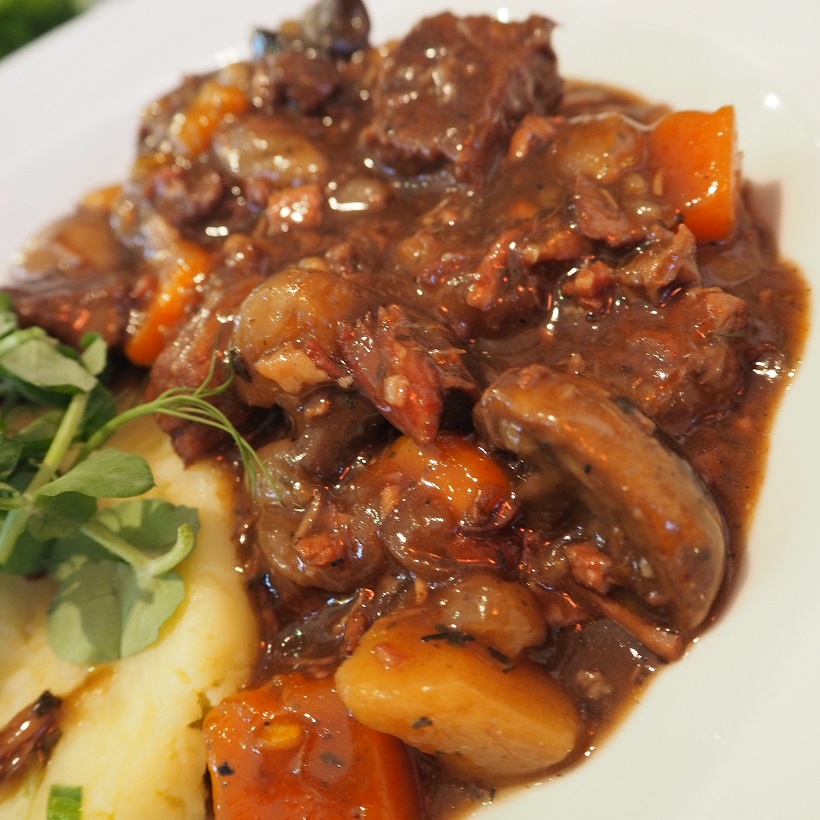 A little bit jealous but by no means disappointed, I chose the Thai green curry with chicken (£9.95). An extremely generous portion of a well spiced curry broth covered ginormous chunks of chicken that seemed never ending. The asparagus in the curry was cooked well as was the rice. As there was such an abundance of the delicious curry sauce, I’d have liked either more rice of a small naan bread to mop it all up to make sure none of it was wasted. Of course some may say to serve less sauce but where’s the fun in a small portion eh? It defeated me in the end though, even with Paul helping out on a couple of the chunks of chicken! 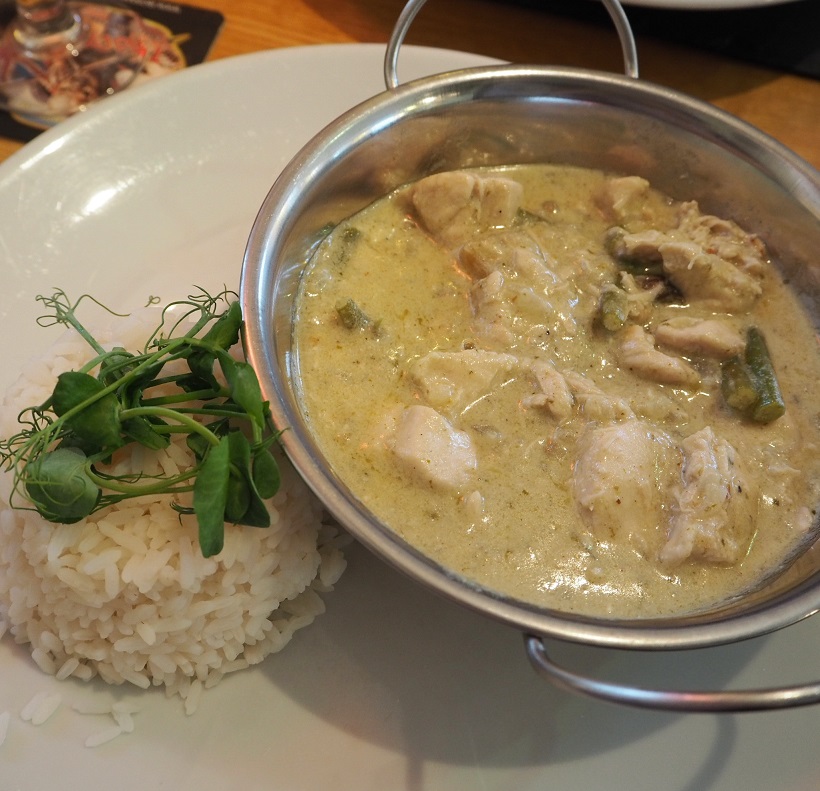 With no room for a pudding, we opted for a liquid dessert – an extra drink in the Miners Arms bar with the locals. Great banter and atmosphere in the drinking side definitely helped confirm we need to buy a new bloody house!

With the weather picking up (apparently!) The Miners Arms is a great place to visit on a sunny afternoon for a cold drink and some tasty grub. Be sure to say Hi to Johan, he’s the chap rushing round the restaurant making sure all his customers, both new and old, are happy and well fed!